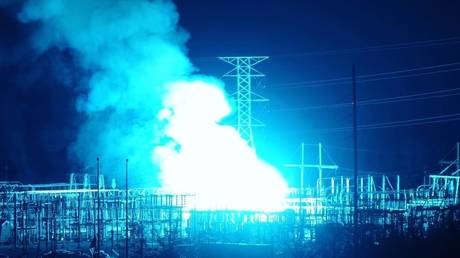 A large fire has broken out at Consolidated Edison energy company in New York after a generator at the power plant blew out, surreally lighting up the entire city’s skyline and triggering fears of an ongoing alien invasion.

Video footage from the scene showed a plume of smoke ascending into the sky with clear tongues of flame visible on the ground. The smoke coming from what looked like a destroyed generator lit up the sky neon blue, prompting fears that New York was under an alien invasion.

The fire, which has since been brought under control, caused a power outage in the area and also affected flights out of LaGuardia Airport.

The plant operator said that a “brief electrical fire” at an Astoria substation involved “electrical transformers.” Consolidated Edison is now investigating the cause of the incident. No injuries have been reported.