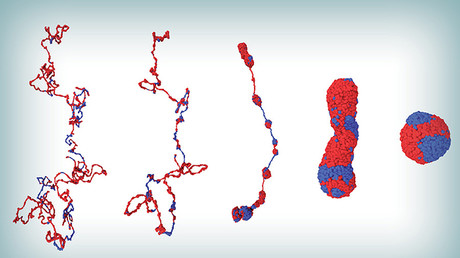 Scientists have mapped the movement of chromosomes inside our cells for the first time – a development that may have significant implications for the study of genetic diseases and human health, according to researchers.

The study, published in Nature, and carried out by scientists at the University of Texas at Austin, used computer modelling to create a mesmerizing depiction of how chromosomes move inside the human cell.

The experiment was able to establish how billions of base pairs of DNA get packed into an impossibly small space without getting tangled.

The team examined chromosome 5, associated with some forms of leukemia, Parkinson’s disease and aspects of male infertility; and chromosome 10, linked to types of porphyria, a blood disease; glioblastoma, an aggressive brain cancer; and a type of congenital deafness.

The chromosomes changed depending on the cell – for example, chromosome 5 in one cell could move more slowly perhaps, than in another cell.

In the gif below you can see chromosome 5 packaging itself. It begins like a piece of loose string and then becomes tighter before eventually coming together in the shape of a small ball.

“We found that the movement of the chromosomes was sluggish, reminiscent of glass-like behavior. We believe this might have a profound consequences for how the cells behave both individually and collectively,” said lead author Guang Shi.

“Rather than the structure, we chose to look at the dynamics to figure out not only how this huge amount of genetic information is packaged, but also how the various loci move,” said co-author Dave Thirumalai.

“We learned it is not just the genetic code you have to worry about. If the timing of the movement is off, you could end up with functional aberrations,” he added.

Further research aimed at gaining a greater understanding of this movement could lead to a breakthrough in the study of genetic diseases, human health and gene editing, according to the researchers.

“It would be very interesting to see if the chromosomes in a cancer cell, where there is some mutation, if the movement is different,” Thirumalai said.