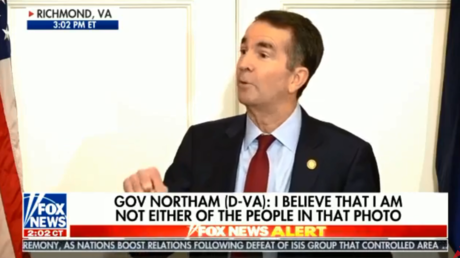 Ralph Northam, who is under pressure to resign as Governor of Virginia over an offensive photo from his yearbook, denied he was either of the two men shown in the picture. A day earlier he said otherwise.

In a stunning turnaround on Saturday, Northam has retracted his own words from a day earlier, when he apologized for a “decision to appear” as he did in the photo. Unearthed by conservative news outlet Big League Politics and picked up by mainstream media, the picture shows two men, one wearing a blackface or another sporting a KKK robe.


Standing alongside his wife on Saturday, Northam reiterated that he was “appalled” that the image was included in his yearbook page. However, he insisted that he had no recollection of the picture being taken and believed he was not in it, contrary to what he said on Friday.

“I believed then and now that I’m not either of the people in that photo,” he said. He stressed that his U-turn is not an attempt to shun away from responsibility, noting that it was call to “recognize and prevent it from being published in the first place.”

Northam admitted that many would “find this difficult to believe” this as the photo did appear on his own page in the 1984 Eastern Virginia Medical School yearbook. He said when he conceded that he was one of the two men he thought it was “the most likely explanation.”

In the hours that I made my statements yesterday, I reflected with my family and classmates from the time and I formed my conclusion that I am not the person in that photo.

The governor offered a crafty argument on why his recollection should be trusted, saying he remembers clearly actually donning a blackface on another occasion the same year. Northam said that he has “a vivid memory” of him wearing a blackface to impersonate Michael Jackson in a dance concert which he subsequently won.

In a cringe-worthy moment of the press conference, Northam was seemingly prepared to repeat his award-winning moonwalk when asked by a journalist if he still got it in him. His wife stopped him saying the circumstances were inappropriate for it.

The awkward episode was instantly lambasted by people on Twitter, including President Donald Trump’s son Donald Trump Jr, who argued it would have put a nail in the coffin of a Republican’s career.

The Democratic governor drew bipartisan condemnation for his yearbook faux pas, with both Republicans and Democrats calling for his immediate resignation. However, Northam who was elected governor in a tightly contested race in 2017, refused to budge in to the demands.

He stood by his refusal on Saturday, saying that he intends “to continue doing the business of Virginia” despite the growing outrage over “racist,” “offensive” and “disgusting” photo.

Since 1984, red lines of political correctness have shifted tremendously. What was considered then a rude joke now seems a resignation-worthy offense – the fact that Northam cited in his defense.

“In the place and time where I grew up, many actions that we rightfully recognize as abhorrent today were commonplace,” Northam said. The comment, however, also seemed to add fuel to the fire of a raging Twitter debate.

Many argued that his press conference has missed the point, as he still wore a blackface, per his own admission. So Northam’s attempt to moonwalk away from trouble may not be as effective as he hopes.

Northam refused to grasp that blackface is dehumanization. Wearing us like costumes makes it easier to render us homeless. Easier to take away our ballots. Easier to silence our voices in the public square. To miseducate us. To let us die in hospitals. To kill us with impunity.