The Republican healthcare proposal amounts to a tax cut for the rich, and the US economy would benefit far more from establishing single-payer healthcare, according to Warren Buffett, one of the richest men in America.

The 86-year-old Nebraskan is the chief executive of investing house Berkshire Hathaway and has a net worth of $75.6 billion, according to Forbes. He is the world’s second-richest man, after Bill Gates.

By Buffett’s own admission, the US economic recovery since 2009 has accrued the lion’s share of the benefits to the very wealthy, while most Americans have been left behind.

“The economy is doing well, but all Americans aren’t doing well,” Buffett said in an interview with PBS NewsHour, which aired on Monday. “This has been a prosperity that’s been disproportionately rewarding to the people on top.” 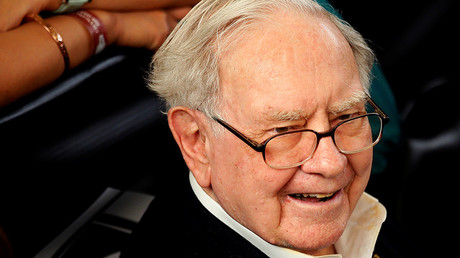 The US currently exports 12 to 13 percent of its GDP, compared to five percent in 1970, which benefits both the US and the world, Buffett said.

“It doesn’t benefit the steelworker maybe in Ohio. And that’s the problem that has to be addressed, because when you have something that’s good for society, but terribly harmful for given individuals, we have got to make sure those individuals are taken care of,” he said.

The Nebraska-based billionaire investor has called for higher taxes on the rich since 2011, and endorsed Hillary Clinton in the 2016 presidential election.

Berkshire Hathaway takes full advantage of the current tax laws, by Buffet’s own admission. Asked about the $75 million the company deferred in taxes, he said, “We follow the law, and we got a million shareholders. And I think they probably expect us to do that. That doesn’t mean I don’t think the law shouldn’t be changed in some way.”

Berkshire Hathaway also owns a major share in Wells Fargo, a big bank fined $185 million last year for creating phantom deposit and credit card accounts without customers’ permission. Around 5,300 employees involved in the fraud were fired, and the bank agreed to pay $5 million in compensation to the customers affected.

“It was a terrible mistake. They incentivized bad behavior,” Buffett said about the scandal.

Commenting on the ongoing Republican efforts to repeal and replace Obamacare, Buffett said the proposal approved in the House of Representatives would have saved him more than 17 percent in taxes this year – $679,999, to be precise.

“You could entitle this, you know, Relief for the Rich Act or something, because it – I have got friends where it would have saved them as much as – it gets into the $10-million-and-up figure,” he said.

Bringing down the costs of healthcare would do more to help American business than cutting corporate taxes, Buffett told PBS’ Judy Woodruff.

“There’s an awful lot of people involved in the medical [field], just the way the ecosystem works, that there is no incentive to bring down costs,” Buffett said.

Buffett also voiced his tentative support for a single-payer healthcare system, championed by a wing of the Democratic Party led by Senator Bernie Sanders.

“With my limited knowledge, I think that probably is the best system,” Buffett said. “We are such a rich country. In a sense, we can afford to do it.”

According to Buffett, the US should be the world’s moral leader as well as economic. He urged investors to “bet on America” and look at the long term rather than the daily fluctuations of the stock market. He also cautioned US President Donald Trump not to take too much credit for the rising stocks.

“If I ever get elected president, I will never claim credit for anything the market does, because I don’t want to be blamed when it goes the other direction,” Buffett said.

Berkshire Hathaway also owns BNSF Railway, one of the sponsors of the PBS NewsHour.