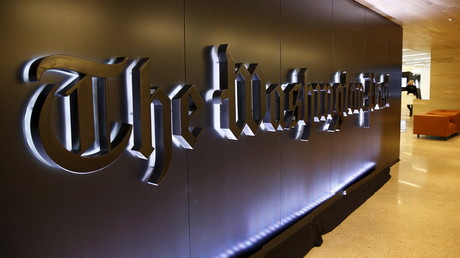 The Washington Post has been forced into making several corrections to a story claiming that the number of people killed in US schools this year was double that of those killed serving in the military.

The newspaper revised the piece after it emerged that reporter Philip Bump had based his findings on incomplete figures gleaned from Department of Defense press releases. The story has since been updated with new information provided by the website ‘Task & Purpose.’

The new figures added an extra seven fatalities to the total of military fatalities, meaning that – while the number of people killed in school shootings is still quite shocking – it is by no means “double” the number of those killed while serving in the military.

“The figures for 2018 do not suggest schools are more dangerous than combat zones. After all, there are more than 50 million students in public elementary and high schools and only 1.3 million members of the armed forces,” the story reads.

The story added that members of the military are around 40 times more likely to be killed than a student in a school shooting, representing a revision of the original piece, which put the rate at 17 times more likely. The revision has sparked a mixed reaction online. The original report was shared widely on Twitter, with a number of liberal commentators seen to regurgitate the false claim.

Here are some FACTS:

The # of children killed by mass shooters in the US is TWICE as many as the number of Military personnel killed both in and out of combat in 2018.

We spend $600 BILLION on the military a year, yet congress can’t even debate gun control.#GunControl

Critics were quick to brand the report “fake news” and claim it as an example of perceived anti-gun bias by the liberal media. Others were more philosophical, saying that while the reporting may have been incorrect, the real numbers remain startling.

You buried the truth in your article, liars,
“So far in 2018, a member of the military has been about 40 times as likely to be killed as someone is to die in a school shooting,…c

My wife just linked me an article from @CNN that’s States school shooting deaths are “nearly double” military service deaths. It references a @washingtonpost article that has since been corrected to show that it in fact is no where close to being double. THIS IS FAKE NEWS, SMH pic.twitter.com/ArzqgFGvBI

Read this all the way through. Then ponder this… This article is a comparison of school shooting deaths and military deaths. We’ve a major problem on our hands