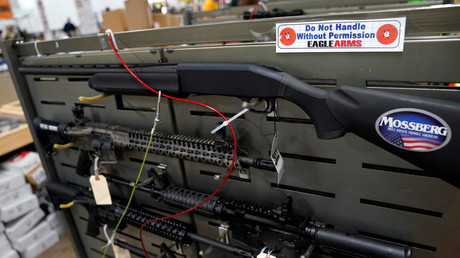 Just weeks after two of America’s biggest retailers changed their policies to sell guns only to people aged 21 and over, they’re facing an age discrimination lawsuit. The changes were made following the Parkland school shooting.

Oregon man Tyler Watson filed lawsuits against both Dick’s Sporting Goods and Walmart after he was refused service when attempting to buy a .22-caliber Ruger rifle on February 24 and March 3 respectively. Dick’s Sporting Goods also announced it would no longer be selling so-called semi-automatic “assault rifles.”

The new gun policies were enacted by the retailers on February 28, reports the AP, in the wake of the deadly Stoneman Douglas High School shooting in Parkland, Florida. Nikolas Cruz, the 19-year old suspect in the school shooting, had legally bought the AR-15 semi-automatic rifle used in the massacre.

At present, anyone over the age of 18 that fulfils the necessary legal requirements, can buy shotguns or rifles in Oregon. Federal law prohibits the sale of handguns to minors, but not rifles or shotguns.

“He was really just trying to buy a rifle,” said his attorney Max Whittington, as cited by WTAE. Watson is calling on the retailers “to stop unlawfully discriminating against 18, 19, and 20 year-old customers at all Oregon locations,” in addition to seeking unspecified punitive damages and attorney’s fees. Watson is not an NRA member nor a member of any organized movement and already owns several firearms, according to his lawyer, as reported by The Oregonian.

“In light of recent events, we reviewed our policy on firearm sales. As a result, we raised the age restriction for the purchase of firearms and ammunition to 21 years of age. We stand behind our decision and plan to defend it. Once we are served with the complaint, we will respond as appropriate with the Court,” Walmart spokesperson Randy Hargrove told RT.com. RT has contacted Dick’s Sporting Goods for additional comment.

Oregon was the first state to enact new gun control legislation after the Parkland shooting, though the bill had been introduced before the school attack. The bill, signed into law Monday, forbids people convicted of domestic abuse or under restraining order from owning firearms. The move closes a loophole in a 2015 law that excluded such abusers from bans on gun ownership or purchase.

#ICYMI: I proudly signed #HB4145 into law today. We know that the presence of a gun in a domestic violence situation makes it 5 times more likely that a woman will be killed. Closing the Intimate Partner Loophole will help save lives. https://t.co/tyIEGjKlXn