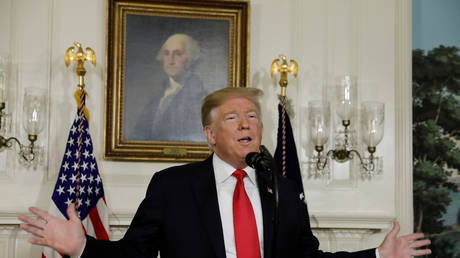 In a “major announcement” from the White House, US President Donald Trump offered a three-year stay of deportation for DACA recipients in exchange for border wall funding to end government shutdown. Democrats have already said no.

Trump began his speech by describing the “tragedy” at the border, saying that a legal immigration system that “upholds our laws, our traditions and our most cherished values” was broken.

“We are now living with the consequences, and they are tragic,” he said, blaming it on decades of partisan gridlock and neglect.

The president offered what he called a “common-sense compromise” that both Republicans and Democrats ought to endorse:

“To build trust and goodwill,” his proposal also includes:


Trump’s offer has already been rejected by Democrats, however. After Axios published an outline earlier on Saturday, House Speaker Nancy Pelosi (D-California) called it “a compilation of several previously rejected initiatives, each of which is unacceptable and in total, do not represent a good faith effort to restore certainty to people’s lives.”

Senate Minority Whip Dick Durbin (D-Illinois) – reported by Axios to have worked with Trump’s son-in-law Jared Kushner on the compromise – also rejected it, saying an hour before the president’s speech that he “cannot support the proposed offer as reported” and demanded that Trump reopen the government “today,” without any wall funding.

@POTUS offers to support 2 bills sponsored by Dems (TPS & DACA extensions)in exchange for Border Security (something Democrats claim to support) & the immediate response from Dem leaders is No?

About a quarter of the US government has been shuttered since December 22, due to a standoff between Trump and the congressional Democrats over some $5.6 billion for construction of a wall on the US-Mexico border.

Senate Democrats blocked the attempt to approve the funding until the new House of Representatives convened on January 3 with a Democrat majority. As the new Speaker of the House, Pelosi has refused to give any funding to the wall, ever, at one point leading to Trump walking out of negotiations at the White House and calling them a “total waste of time.”

Some 800,000 federal workers are affected by the shutdown, and are either staying home or working as “essential” personnel, but not receiving any pay until the government reopens. The 29-day (and counting) shutdown has been the longest in US history, surpassing the 21-day record set under the Clinton administration in 1996.