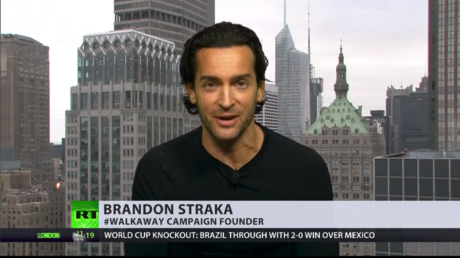 The #Walkway campaign, a grassroots initiative by New York-based stylist Brandon Straka, has been blowing up on Twitter, with disappointed ex-Democrats telling stories of what prompted them to “take the red pill.”

The movement has been gaining momentum since a YouTube video, starring Straka, went viral. In the video, originally posted late May, Straka, an openly gay man, explains why he decided to bid farewell to the party despite being a “lifelong Democrat.”

“For years now, I have watched as the left has devolved into intolerant, inflexible, illogical, hateful, misguided, ill-informed, un-American, hypocritical, menacing, callous, ignorant, narrow-minded, and at times blatantly fascistic behavior and rhetoric,” Straka says in the video, arguing that the in its effort to drum up the votes, the Democratic Party “has joined forces with the extremist left.”

Accusing Democrats of cultivating a victim mentality among the party’s minority supporters, Straka argues that its attempt to portray a person of color, a woman, an LGTB person, a migrant as a “victim of systemic oppression” is the party’s “greatest and most insidious lie” that is needed so the minorities will see their saviors in Democrats, who in fact do nothing to improve the situation.

The video has since been watched over 420,000 times, receiving over 16,300 likes and fewer than 300 dislikes. People have been posting their own testimonies across all social networks under #Walkaway hashtag on what had triggered them to leave the party

I used to be a liberal Democrat. Then I started thinking for myself and using logic to think things through to their reasonable conclusion. #WalkAway#WalkAwayCampaign

The momentum that has been generated by the campaign has caused some to suspect that it was a product of conservative spinmasters and Straka was no more than an actor, chosen to read the text. The activist himself dismisses the allegations of “being hired by the Koch brothers” or conservative news site Breitbart as laughable, saying that he was behind the script “100 percent” and drew inspiration “from the passion that I feel in my heart for what I was saying.”

Straka, who has become a frequent guest on TV shows since his campaign took off, told RT that the ultimate goal of his movement is to “get people back in touch with their voices.”

Speaking about the last straw that caused him to turn his back on his former party, the stylist-turned-activist said that “the identity politics” and “the politically correct culture” promoted by the Democrats eventually “take over common sense.”

“It just began to get more and more out of control and it was something I could no longer tolerate,” he said, adding that while, as a gay man, he was “a kind of Democrat by default,” the direction in which the Democrats are going has been making him “extremely uncomfortable” for years.

While Straka has faced a massive positive feedback, critics argue that those who joined the movement are not Democrats who have suddenly awaken to the truth, but conservatives. Some long-time conservative supporters have indeed tweeted their own videos with the #Walkaway hashtag, like young black activist C.J. Pearson. He didn’t attempt to portray his address as an ex-liberal’s “walkaway” moment, but simply giving a boost to the campaign.

Now we’ll finally get that impeachment to stick!

But until that happens, keep resisting. Register @GreenPartyUS and challenge Dems from the Left.

And that whole #WalkAwayCampaign was cooked up by the Right. Do your thing and don’t follow orders. https://t.co/8VVTVwBdpF

The Walkaway campaign Facebook page has over 40 thousand followers. Straka argues that most converts are genuine.

“My campaign is not mostly comprised of people who are conservative. And in fact, anybody who is saying that, I encourage them to go into the page,” he said.

Despite hours of video testimonies, shot by real people, some commentators invoked the old ‘blame Russia’ narrative, alleging that the activists might as well be ‘Russian trolls.’

Anyone who is actually fooled by the #walkaway BS, and abandon the Resistance, is a complete and utter moron and was never part of us to begin with. No one that has ever been against Trump is going to start liking him. He only gets worse. Also know, it’s a Russian troll campaign.

“The video testimonials don’t lie, those are not Russian bots, if you will, and these aren’t manufactured stories, these are real people telling real stories,” Straka said