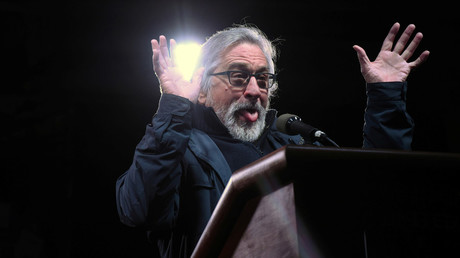 President Donald Trump is swinging back at actor Robert De Niro, who cursed him out on live TV during the Tony Awards ceremony, to a standing ovation from the New York audience.

Calling De Niro “a very Low IQ individual” Trump said the actor “received [too] many shots to the head by real boxers in movies” and might be “punch-drunk.”

“Wake up Punchy!” the president tweeted on Tuesday, on his way back from a summit with North Korean leader Kim Jong-un in Singapore.

The Oscar-winning actor, known for his opposition to the president, got a cheer from the crowd at New York’s Radio City Music Hall on Sunday, when he said “F*ck Trump!” during the awards ceremony honoring Broadway theatrical productions.

…realize the economy is the best it’s ever been with employment being at an all time high, and many companies pouring back into our country. Wake up Punchy!

While De Niro’s outburst received accolades from the anti-Trump #Resistance, it was the president’s fans’ turn to gloat after the twitter response.

.@mrod21mvp
You hope Trump fails today. (Don’t bother to deny it. Nothing would make you happier.)
You’d prefer that – a minor political setback for POTUS – than world peace.
That’s Trump Derangement Syndrome.
If you can’t see it in yourself, look at DeNiro – same programming.

America would check in to see how Robert DeNiro is doing, but she’s too busy winning 😁😂

One Trump supporter went so far as to argue that calling De Niro “low IQ” proved that Trump was not a racist, as he had directed the same insult against a black Democratic congresswoman.

There remains a bit of confusion as to why Trump would think De Niro would be “punch drunk” from boxing movies. The aging actor’s most recent boxing-related feature was 2016’s ‘Hands of Stone,’ in which he played a trainer. He may have stepped into the ring for 2013’s ‘Grudge Match,’ which also featured Sylvester Stallone. One of De Niro’s breakout roles, of course, was 1980’s ‘Raging Bull,’ a biopic of the boxer Jake LaMotta.