Immigrants from Central America are welcome so long as they come legally, Vice President Mike Pence said during a visit to Brazil. The immigration battle continues at home, however, as Democrats sued over family separations.

If Central Americans thinking of immigrating to the US “can’t come legally, don’t come at all,” Pence said on Tuesday in Brasilia, at a joint press conference with President Michel Temer of Brazil, according to Reuters. 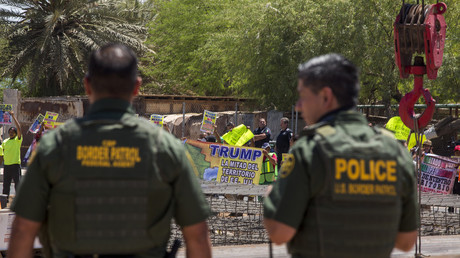 Immigration has partially usurped the agenda of Pence’s long-planned trip to Brazil, Ecuador and Guatemala, which was originally focused on trade and security talks.

Facing a surge in illegal border crossings, the Trump administration announced it would jail everyone caught outside of regular ports of entry. As part of the crackdown, the Department of Homeland Security had separated some 2,000 minors who had crossed the border illegally with one or both parents, while the adults were jailed and processed.

Amid the mounting outcry from media and the Democrats, President Donald Trump announced last week he would temporarily suspend the separation, though it remains unclear if anything has changed in the treatment of illegal border crossers. Trump has said only Congress has the power to change the immigration laws.

A vote on the bill hoping to do just that, promoted by Speaker of the House Paul Ryan (R-Wisconsin), has been scheduled for Wednesday. Another proposal, put forth by Rep. Bob Goodlatte (R-Virginia) failed last week due to opposition from 41 Republicans and all the Democrats.

While Goodlatte’s bill attempted to address all four White House priorities – funding for the border wall, chain migration, visa lottery and finding a legal status for people brought into the country illegally as children – Ryan’s bill amounts to an amnesty for millions, according to the Center for Immigration Studies and several GOP lawmakers.

The union representing Immigration and Customs Enforcement (ICE) officers is also “seriously concerned” about the bill, its president, Chris Crane, wrote in a letter to Trump.

Meanwhile, seventeen US states and the District of Columbia, all led by Democrats, have filed a lawsuit in federal court seeking to force the administration to reunite families detained on the border.

“This is a rogue, cruel and unconstitutional policy,” Washington state Attorney General Bob Ferguson said in a statement. “We’re going to put a stop to it.”

The most recent similar effort sought to overturn Trump’s temporary ban on entry to the US from several Muslim-majority countries. On Tuesday, the US Supreme Court backed the administration in Trump v. Hawaii, upholding the travel ban in full.