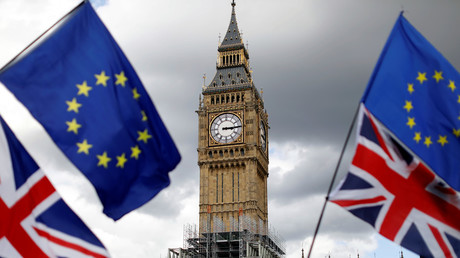 The UK Electoral Commission has launched an investigation into the financial links between the Vote Leave campaign, a fashion student and a Eurosceptic veterans’ group at the time of the 2016 Brexit referendum.

In a statement on its website, the campaign finance watchdog said it has begun an inquiry into whether Vote Leave broke the £7 million ($9.3 million) spending limit for referendums, adding that new information has come to light which means it has “reasonable grounds to suspect an offence may have been committed.”

Darren Grimes, a fashion student at the time of the referendum, will also be investigated over the legality of four separate donations amounting to £675,000 to ‘BeLeave’, his fledgling pro-Brexit campaign aimed at getting young people to vote for Brexit. The donations were made by Vote Leave, the official Brexit campaign.

READ MORE: May she go? Paying off Brussels while cutting troops could spark Tory rebellion

Bob Posner, the watchdog’s director of political finance and regulation, said in a statement on Monday: “There is significant public interest in being satisfied that the facts are known about Vote Leave’s spending on the campaign, particularly as it was a lead campaigner with a greater spending limit than any other campaigners on the ‘Leave’ side.

“Legitimate questions over the funding provided to campaigners risks causing harm to voters’ confidence in the referendum and it is therefore right that we investigate.”

An investigation by Buzzfeed News in August last year revealed that the BeLeave campaign raised just £107 in its first 10 weeks. However, in the 10 days before the referendum, the campaign received more than £675,000 from Vote Leave.

A strict £7 million spending limit had been in place for the referendum, with registered individuals legally allowed to spend £700,000. BeLeave was listed by Vote Leave as one of its official outreach groups, and had just 6,000 Facebook fans and fewer than 4,000 Twitter followers at the time of the donation. The money was not given to Grimes directly, however, with the total instead paid directly to AggregateIQ, a Canadian data analytics firm.

While Vote Leave’s donation to Grimes was not counted in its official spending total, the £675,000 could be added to the sum if the investigation finds that Grimes coordinated with Vote Leave over how the money would be spent.

Meanwhile, Veterans for Britain received a donation worth 100,000 from Vote Leave. Led by Richard Kemp, the former commander of British forces in Afghanistan, the group was formed to make a defense argument for Britain leaving the EU.

Writing on Twitter, leading Brexit commentator and barrister Jo Maugham described the delay in opening the investigation as “extraordinary,” adding that the investigation was opened only after his group, The Good Law Project, took legal action against the commission following its decision to drop its previous inquiries.

“We are 18 months after the Referendum vote. It is extraordinary that only now is the Electoral Commission taking a serious look at whether the rules were complied with. And only in response to legal action,” he said.

We are 18 months after the Referendum vote. It is extraordinary that only now is the Electoral Commission taking a serious look at whether the rules were complied with. And only in response to legal action.

The news comes after Amsterdam and Paris respectively won the right to host the European Medicines Agency and the European Banking Authority after Britain leaves the EU. Voting on where the two facilities would be relocated to took place in Brussels on Monday.