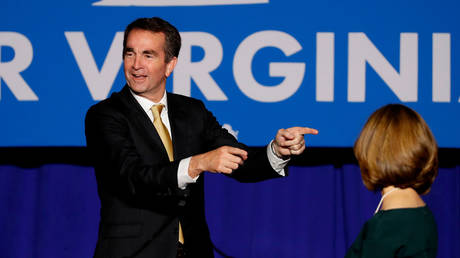 Governor Ralph Northam of Virginia is refusing to resign over photos from his medical school yearbook showing him wearing either a KKK costume or blackface. He campaigned in 2017 on accusing his Republican opponent of racism.

One of the photos from Northam’s page in the 1984 Eastern Virginia Medical School yearbook shows the future governor and a friend at a party, dressed in costumes that are considered unacceptably racist in today’s America. It is unclear which of the two is Northam.

The photo was first published by the conservative news outlet Big League Politics, but was soon authenticated by The Virginian-Pilot of Norfolk, the state’s largest daily newspaper.

Contacted by WUSA-TV, the school confirmed the photo was authentic and did appear in the 1984 yearbook, but denounced it as being against its “culture of inclusion.”

NEW – 5:15PM STATEMENT FROM #NORTHAM MEDICAL SCHOOL
“We don’t know when or where this photo was taken but it is from the 1984 yearbook. We promote a culture of inclusion and our principle mission is to recruit, educate, & train a culturally competent healthcare workforce”@WUSA9pic.twitter.com/gscdoX2JKl

“Racism has no place in Virginia,” Republican Party of Virginia chairman Jack Wilson said, commenting on the photo. “These pictures are wholly inappropriate. If Governor Northam appeared in blackface or dressed in a KKK robe, he should resign immediately.”

For several hours on Friday, Northam remained silent amid frenzied speculation about the photo. Which one of the figures was he? Will he resign over it? Once he finally spoke up, he dodged the first question, and decided to double down on the second.

So you’re Ralph Northam… do you come out and say you were the one in black face or the one in the KKK costume?

Pray for his comms team.

“I am deeply sorry for the decision I made to appear as I did in this photo and for the hurt that decision caused then and now,” the governor said in a statement released on Friday evening. “This behavior is not in keeping with who I am today and the values I have fought for, throughout my career in the military, in medicine, and in public service,” he added.

Instead of resigning, however, Northam said he is ready to do the “important work” to “heal the damage this conduct has caused,” stating his “absolute commitment to living up to the expectations Virginians set for me when they elected me to be their Governor.”

My fellow Virginians, earlier today I released a statement apologizing for behavior in my past that falls far short of the standard you set for me when you elected me to be your governor. I believe you deserve to hear directly from me. pic.twitter.com/1rSw1oxfrX

The governor found himself under increased scrutiny this week, after a radio interview defending a controversial Democrat proposal to relax restrictions on third-trimester abortions, in which he described what sounded like infanticide.

Just last week, Florida Secretary of State Michael Ertel, a Republican, resigned in disgrace after photos of him mocking Hurricane Katrina survivors by wearing blackface and drag in 2005 were posted online.

During the 2017 gubernatorial campaign, Northam ran against campaign accusing his opponent, Republican Ed Gillespie, of racism and bigotry over even lukewarm support for President Donald Trump’s immigration reform agenda. One of the groups backing Northam, the Latino Victory Fund, even released an ad showing a truck flying a Confederate flag and Gillespie stickers trying to run over minority children.


Back then, Northam was also accused of scrubbing the picture of his running mate, Justin Fairfax, from campaign materials in certain parts of Virginia. Fairfax is African-American, and currently serves as Northam’s lieutenant-governor.

Northam, who served as lieutenant-governor since 2014, won the 2017 election with the largest margin for a Democrat since 1985, amid the highest voter turnout in two decades, 47 percent.

The yearbook controversy has prompted several journalists to wonder at the ineptitude of both the mainstream media outlets – which somehow never dug up the yearbook photo, despite all the attention they gave to the Virginia election – and Gillespie’s campaign, when it came to doing opposition research.

Can’t wait for the WaPo headline:
“Until this week, Ralph Northam was known as a decorated a fighter for diversity and inclusion. Now people are calling him a racist.” https://t.co/F0CAdmhbq2

If you want an idea of how well the media vets Democrat candidates, Ralph Northam supports infanticide and dressed like a Klan member and we’re just now hearing about it

Ralph Northam’s opponent in the 2017 VA gubernatorial election, Ed Gillespie, was previously head of the RNC, which has a large opposition research operation. Yet he couldn’t find a school yearbook with Northam (apparently) dressed in blackface/KKK garb. Epic fail