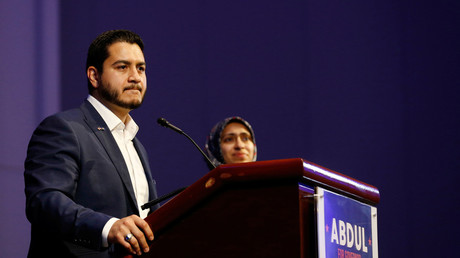 Michigan nearly elected an ISIS-loving communist as its next governor, according to a GOP senate candidate, who offered up his illuminating analysis after a liberal Muslim lost the state’s Democratic gubernatorial primary.

Stewart told The Hill that the tweet was sent from an employee and was deleted as soon as he saw it, adding that the person in question no longer has access to the Twitter account.

“One of my vendors put out a tweet last night that attempted to link a Michigan gubernatorial candidate to ISIS, because he apparently received support from purported extremists,” Stewart said. “I don’t believe in guilt by association. I have been the target of very similar smears, and I don’t believe in using such tactics against others.”

“Shawarma trucks on every corner. and Medicare for All,” El-Sayed replied to Stewart in a terrifying Twitter fatwah.

Stewart has been an unabashed supporter of his state’s “heritage,” showing little shyness about giving stump speeches with Confederate flag backdrops.

And, while Stewart may celebrate El-Sayed’s defeat, his own chances at joining the senate are slim: He’s currently trailing Kane by more than 20 percentage points, according to a recent poll from Virginia Commonwealth University.