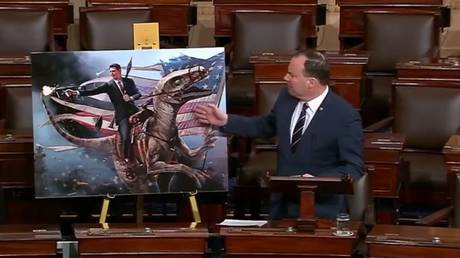 Alexandria Ocasio-Cortez’ ambitious ‘Green New Deal’ has been roundly criticized by the right, but none have been as creative as Republican Sen. Mike Lee, who used giant cartoons and Star Wars memes to pick apart the plan.

As the Senate prepared to vote on the environmental masterplan on Tuesday, Utah’s Mike Lee used a series of blown-up cartoons in an apparent effort to mock the plan. First deploying an image of former President Ronald Reagan firing a submachine gun while riding a velociraptor, Lee pointed out the “stirring, unmistakable patriotism of the velociraptor holding up a tattered American flag.”

Lee then insisted that the Green New Deal, which promises to replace air travel with high-speed trains, would force people to commute to work atop Tauntauns, the snow-dwelling creatures seen in Star Wars: The Empire Strikes Back.

“Not only are Tauntauns carbon-neutral,” Lee proclaimed, “but according to a report a long time ago and issued far, far away, they may even be fully recyclable and usable for their warmth on a cold night.”

GOP Senators are using their Congressional allowances to print Aquaman posters for themselves to argue that a #GreenNewDeal saving our nation from climate change is a ‘waste of money’ 😂 https://t.co/iMNY0dJmCy

Sea travel could be replaced by harnessing “giant, highly trained seahorses” for transport, as Aquaman did in the world of DC Comics, Lee continued. He then cited the “indispensable documentary film ‘Sharknado 4’,” as his absurdist performance dragged on a whole 14 minutes.

Sponsored by hotshot New York Socialist Rep. Alexandria Ocasio Cortez and Massachusetts Sen. Ed Markey, the Green New Deal is a radical proposal that aims to make America completely carbon-neutral by 2030. Aside from a transition to renewable energy, the deal calls for top-down income redistribution to combat “systemic injustices,” a federal jobs and welfare guarantee, and a host of other socialist caveats.

The legislation has been ridiculed from all sides for its proposed abolition of air travel and fossil fuel powered vehicles, as well as its estimated cost of over $50 trillion, over twice the worth of the entire US economy. An early overview of the plan, since removed from Ocasio-Cortez’ website, promised “economic security for all who are unable or unwilling to work,” swore to sideline the private sector in all environmental decision-making, and even weighed in on eliminating “farting cows.”

The Senate vote on the legislation was called by Majority Leader Mitch McConnell (R-Kentucky), in an effort to force Democrats to take a position on the deal. While Republicans have excoriated the Green New Deal, it has not proven popular with centrist and establishment Democrats either. Senator Dianne Feinstein has rubbished the deal, claiming “there’s no way to pay for it.” House Speaker Nancy Pelosi was equally dismissive, referring to the deal last month as “the green dream, or whatever they call it.”

The GOP’s whole game of wasting votes in Congress to target others “on the record”, for leg they have no intent to pass, is a disgrace.

Stop wasting the American peoples’ time + learn to govern. Our jobs aren’t for campaigning, & that’s exactly what these bluff-votes are for. https://t.co/ELzpQhlezo

Most Democratic Senators, the New York Times reported, are expected to simply vote ‘present’ on Tuesday.