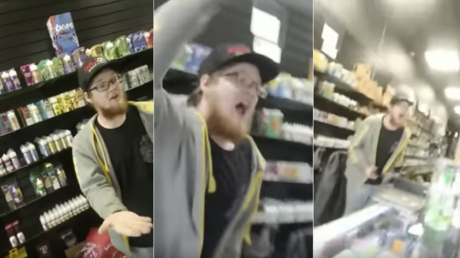 After a video of his unhinged verbal and physical attack on a customer wearing a Trump t-shirt went viral, a clerk at an Atlanta vape store has reportedly been fired. Score one for Twitter vigilante justice?

Seemingly triggered by Ian Furgeson’s pro-Donald Trump t-shirt (though we don’t know what happened before he started recording), a clerk at Xhale City Vape escalates from threatening to call the cops to screaming and hitting Furgeson in the space of a minute. Furgeson keeps his cool, while a second customer looks on in disbelief, probably wishing he had walked into any other vape store in the city.

The clerk and Furgeson trade threats – “Let me call my boss” vs. “I’m calling corporate” – and the clerk begins screaming profanities, accusing Furgeson of being “racist” while using a racial slur himself and reporting the offending t-shirt to his boss (“I’m not serving anyone that has to do with…that f**ker!”). His screams gradually rise to high-pitched shrieks as he experiences a total meltdown.


Furgeson doesn’t exactly try to defuse the situation, needling the employee by demanding “Do my bidding!” just when it appears the employee might be willing to let him buy the vape cartridge he wants in exchange for his keeping silent about the altercation, but watching the employee screech himself hoarse is truly surreal. What happened to “the customer is always right?“

Xhale City’s Yelp page was soon deluged with negative reviews calling for the hot-tempered employee to be fired, and the company reacted swiftly. According to a Facebook post, they fired him “immediately” and apologized to Furgeson. The company’s Facebook pages have since gone dark, and only a few suspicious parody accounts remain, but Furgeson has made his peace with Xhale City, if his latest video is anything to go by.