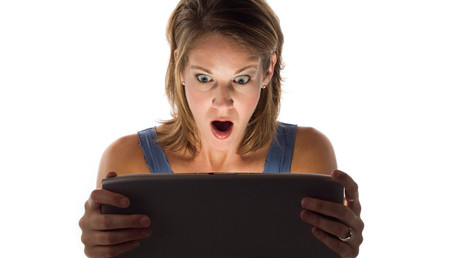 Lawyers in Utah received a very NSFW email Monday. An image of a topless woman popped up in an email sent from the Utah State Bar, shocking lawyers across the across the region.

It was sent to advertise its spring convention in St George. Somehow, a photograph of a woman’s breasts was included in the mail out.

The topless picture wasn’t some sort of inventive marketing ploy, the Utah State Bar insists. The organization quickly sent an apology email once they were alerted to the issue. “Apparently we have an email sent that has an offensive image on it,” the email signed by the group’s IT Director read. “I deeply apologize for this an am investigating the cause.”

Apologies to all who received an inappropriate email from the Utah State Bar. We are aware of the situation and are investigating the matter.

“We are horrified,” John Baldwin, executive director of the Bar, said in an email, WTKR reports.“We are investigating to discover how this occurred. Our goal is to find out what happened and ensure it never happens again.”

It isn’t clear whether the image was added to the email by a staff member, or if it is some sort of hack.

My guess is that Spring Convention is going to have record (and disappointed) turnout.

To my students preparing for this week’s law exam, which may seem stressful right now: I have found a group of law people having a worse week … https://t.co/Xoi1kWEdBJ

I wonder if anyone had their marriage ruined over this. I bet they’d know how to sue

Yeah….opened up that email in the middle of the House gallery and freaked out! My intern sitting next to me was laughing so hard