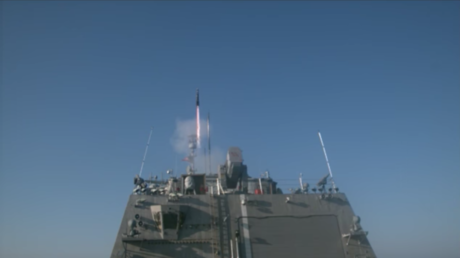 During the live-fire missile exercise off the coast of Virginia on May 11, USS Milwaukee (LCS 5) fired four longbow hellfire missiles that “successfully struck fast inshore attack craft targets,” the Navy said in a statement.

“During the evolution, the ship’s crew executed a scenario simulating a complex warfighting environment, utilized radar and other systems to track small surface targets, simulated engagements and then fired missiles against the surface targets.”

The video released by the navy shows the missiles being fired vertically before striking the simulated targets at sea.

Last week’s launch marked the first integrated firing of the Surface-to-Surface Missile Module (SSMM) from littoral combat ship (LCS), the Navy noted, adding that it expects the new module to reach “full operational capability” by the end of next year.