USA Today has edited an article which added an implied ‘pedophilia’ angle to the saga of SCOTUS nominee Brett Kavanaugh after a massive outcry, clarifying that it was an opinion piece and deleting some controversial passages.

The article by Erik Brandy, which was published on USA Today’s website on Friday, revolved around Kavanaugh’s words during a Senate testimony on Thursday that he may never be able to coach his daughters’ basketball team anymore due to the sex assault accusations and the whole scandal surrounding his Supreme Court nomination.

The author questioned if the nominee should ever coach youngsters and alluded to the case of Larry Nassar, a US Gymnastics team coach who was found guilty of multiple sexual assaults, despite it not having any relation to the issue. Kavanaugh, 53, is accused by college professor Christine Blasey Ford, 52, over an incident which allegedly occurred 36 years ago, while they were both high school students.

A previous tweet contained a statement that has since been edited out of a sports column. That tweet has been deleted. The updated opinion column and editor’s clarification are here: https://t.co/zhFOWMIjCb

The article caused a huge backlash from conservative commentators online and, in an unusual move, the outlet made significant changes to the piece. 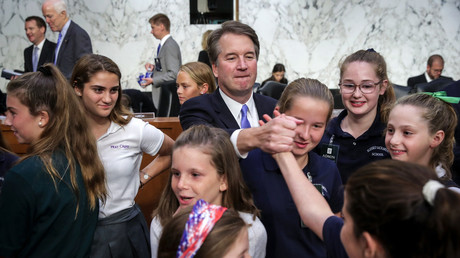 The headline has been changed to clarify that it was an opinion, while the text is now opening up with an editor’s note, which reads: “Supreme Court nominee Judge Brett Kavanaugh has told members of the Senate Judiciary Committee he loves coaching his daughters’ girls basketball teams, but said in testimony Thursday “thanks to what some of you on this side of the committee have unleashed, I may never be able to coach again.” The intent of this commentary was to address that question. The column was re-edited to more closely reflect that intent and labeled to reflect it as the writer’s opinion.”

Several paragraphs calling on Kavanaugh to stay away from youth sports have also been deleted.

“The US Senate may yet confirm Kavanaugh to the Supreme Court, but he should stay off basketball courts for now when kids are around,” one of the removed passages read.

The paragraph that concluded Brandy’s original piece was also dropped. “The nation is deeply divided. Sometimes it feels like we don’t agree on anything anymore. But credibly accused sex offenders should not coach youth basketball, girls or boys, without deeper investigation. Can’t we all agree on that?” it used to read.

The Kavanaugh saga has been the focus of media attention over the last few weeks with many US outlets not shy of taking sides. But USA Today became the first to actually make considerable changes under public pressure.

However, the amendments didn’t seem to appease the critics, who said that the move changed nothing and expressed hope that USA Today should still be sued over the “shameful” article and apologize to Kavanaugh.

The shout of guilty is never overcome by the whisper of innocence. Anyone involved in editing or approving for publication should be fired immediately. There must be accountability if this campaign of character assassination is to be stopped.

This changes nothing. I’ll say it again:
I pray you people get sued, lose big time, and go out of business as a result.

One of the sickest things I’ve ever read. You don’t deserve to use USA in your company name.

Think that makes it better? Issue an official apology to #JudgeKavanaugh , his family and the oarents of the girls he coaches.

The entire column should have been deleted and the writer fired!!! This was beyond disgusting. It was vile and evil and was designed to destroy a man. No different than what has been said about gay people or black people in the 60’s. #ShameOnYOU