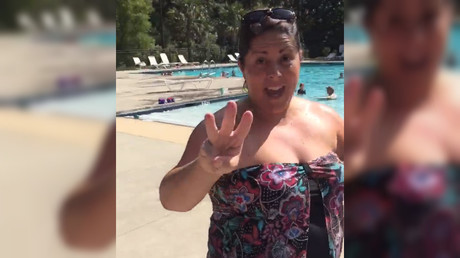 For most people, going to the swimming pool is a relaxing way to pass a sunny afternoon, but things didn’t go that way for a South Carolina woman who ended up assaulting a teenager and biting a police officer.

Stephanie Sebby-Strempel reportedly told a 15-year-old black boy and his friends that “they did not belong” at the pool in Summerville, South Carolina, according to the Charlotte Observer.

READ MORE: Teen who died in jail after being tasered in groin – and other cases involving the infamous stun gun

The incident report said Sebby-Strempel labelled the teens “punks” and used racial slurs. One youth captured part of the highly charged exchange on video and a family member shared it on Facebook. The video shows Sebby-Strempel striking the teen. It quickly went viral, has now been viewed nearly 850,000 times and the woman has been dubbed “Pool Patrol Paula.”

“Sebby-Strempel is clearly the aggressor in the assault even going as far as to continue to assault the victim as he was walking away from her,” the police report said.

A spokesperson for Dorchester County Sheriff’s Office told the Observer that Sebby-Strempel got into a fight with police officers when they attempted to serve her with an arrest warrant.

A second incident report says she pushed one detective into a wall, causing knee injuries, and then bit another detective’s arm, breaking the skin.

Her day at the pool ended with charges of third-degree assault related to the teenage boy, and with two counts of assaulting a police officer while resisting arrest.