Senator Rand Paul urged lawmakers to reverse the transfer of weapons in the latest US-Saudi arms deal, saying Saudi Arabia’s military campaign in Yemen has led to an “astounding” humanitarian crisis. The resolution on the rejection of the deal failed in the Senate, however.

“It’s astounding what’s going on there, and it’s being done without your permission, but with your weapons,” Senator Paul (R-Kentucky) said on Tuesday.

“How bad is it in Yemen? Seventeen million people live on the edge of starvation, some … have already died,” he went on to say, standing by an image showing Mohannad Ali, a five-year-old Yemeni child who became a victim of starvation.

The senator also added that, according to some estimates, the “humanitarian crisis in Yemen may be worse than in Syria” and mentioned a refugee group warning of potentially “biblical proportions” of famine.

Recently, veteran humanitarian assistance expert Jan Egeland told Reuters after visiting the war-ravaged country: “We will have a famine of biblical proportions, if it continues like now with only a portion of those in greatest need getting humanitarian relief.”

Paul, who leads the effort to block the controversial arms sale to the Saudi kingdom, said: “The question is – should we give money or arms to Saudi Arabia at all?”

He went on to criticize Saudi Arabia’s human rights record and even said that the US weapons might eventually end up in the hands of Islamic State (IS, formerly ISIS/ISIL) terrorists.

The weapons deal was “a huge, huge mistake,” Paul said, adding, “I do believe there should be rules on who gets our arms.”

However, the resolution of disapproval of the $110 billion deal that US President Donald Trump struck with Saudi Arabia recently eventually failed in the Senate, as it was supported only by 47 lawmakers while 53 senators opposed it. It did, though, receive far greater backing than a similar resolution in 2016 targeting a $1 billion tank deal with Riyadh, which was eventually blocked by the Obama administration.

Paul said that the voting was purely symbolic, adding that the resolution would have been blocked by the Trump administration anyway.

More than 10,000 people have died during two years of the Yemen war, according to UN estimates. A cholera epidemic is currently sweeping through parts of the country, while almost 7 million people face starvation due to the war and the Saudi blockade, according to British humanitarian organization Oxfam. 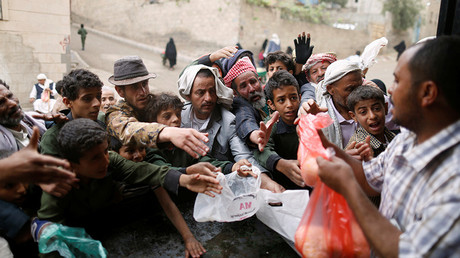 President Trump negotiated the Saudi arms deal on May 20, while on a trip to Riyadh. The State Department said it was worth nearly $110 billion to support “the long-term security of Saudi Arabia and the Gulf region in the face of malign Iranian influence and Iranian related threat.”

Later, the State Department released a general list of the weapons that were included in the deal. The most notable were Patriot and THAAD air defense systems, as well as aerostats, tanks, artillery, counter-mortar radars, armored personnel carriers, helicopters, and “associated training.”

The Trump administration maintains the gigantic weapons deal will boost US industries and allow hundreds of workers to be employed. Trump himself said it created “tremendous investments in the United States,” according to The Hill. He also promised “jobs, jobs, jobs” to come as a result.