The White House says US intelligence services were pleased to have helped thwart a terrorist plot in Russia that “could have killed large numbers of people.” 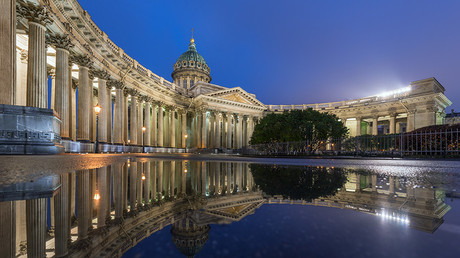 “President Vladimir V. Putin of Russia called President Donald J. Trump today to thank him for the advanced warning the United States intelligence agencies provided to Russia concerning a major terror plot in Saint Petersburg, Russia,” read the statement from the White House. “Based on the information the United States provided, Russian authorities were able to capture the terrorists just prior to an attack that could have killed large numbers of people.  No Russian lives were lost and the terrorist attackers were caught and are now incarcerated.”

The statement also noted that the Russian president even extended his gratitude to CIA chief Mike Pompeo, which Trump promptly passed on to the agency. The two leaders agreed that this operation against terrorism “serves as an example of the positive things that can occur when our countries work together.”

In a series of overnight raids on Wednesday and Thursday, the Russian Federal Security Service (FSB) arrested members of a terrorist cell linked to Islamic State (IS, formerly ISIS) in the Russian city of St. Petersburg, seizing a large amount of explosives, weapons and ammunition and dismantling a bomb-making workshop. The extremists were planning a series of attacks on public places, including a suicide bombing and an explosion in the Kazan Cathedral in the center of the city.

During his phone call with President Trump, Vladimir Putin said that Russian intelligence agencies would also pass on any intelligence about attacks being planned against the United States to their American counterparts.