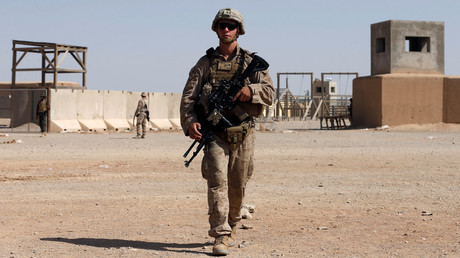 American troops in Afghanistan are apparently fighting for holy jihad. At least that’s the logical conclusion from what the top US Marines general said. He claimed that the Americans rather than the Taliban were the real Mujahid.

The somewhat improbable-sounding claim to the title was made by Robert Neller, a four-star general and the current Marine Corps Commandant, during a press briefing on Wednesday. Neller, 65, was apparently trying to invoke the positive connotation that the term enjoyed in the US in the 1980s, when the Mujahid were fighting in Afghanistan against the Soviet Union – with quite significant assistance from the CIA.

Gen. Neller bashed various Islamist militant groups, including the Taliban, for calling their fighters Mujahid. The Arabic word refers to any person engaged in jihad – both in the wider spiritual or narrower militant sense of the term. Since the 19th century “Mujahid” was increasingly used to describe guerrilla fighters, especially those fighting non-Muslim invaders like Britons in Afghanistan.

“The terrorists call themselves the freedom fighters, the Mujahideen – they’re not,” Neller said, using the singular form of the word. “They’re criminals. I think their big word is ‘takfiri’ [a Muslim accusing other Muslims of apostasy]. They’re apostates. They hide behind Islam. They sell drugs. They kill innocent people. That’s not what Islam is.”

The commandant’s remark was in response to a question about the role played by the US Marine Corps in Afghanistan, on which he declined to elaborate, instead focusing on a possibility to negotiate a peaceful resolution with the Taliban. He expressed support to the effort.

“[The Taliban] have been fighting for – what, 40 years?” he said. “Possibly there will be significant enough program that those Taliban, who think there might be a better way to live their lives than continue to have their young men get killed, being led by men that are not even there in the fight – they are living in other countries – and are convincing them that this is the right thing to do, when all there are really doing is making money on drugs.”