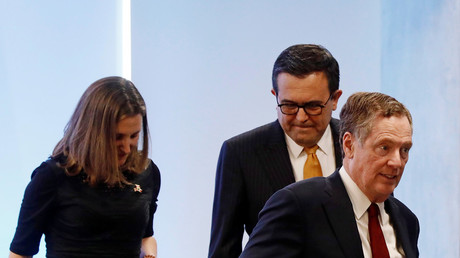 President Donald Trump’s chief trade negotiator has threatened to scupper the free trade deal with Canada and Mexico if no changes are made. US Trade Representative Robert Lighthizer said bilateral accords could replace it.

On Monday, Lighthizer warned that time was running “very short” for the talks in Mexico City to finalize changes to the 1994 North American Free Trade Agreement (NAFTA). “We would prefer a three-way tripartite agreement,” he said, but: “If that proves impossible, we are prepared to move on a bilateral basis.”

The Washington envoy held out exemptions from the looming tariffs of 25 percent on imported steel and 10 percent imported aluminum, which are set to be formally announced this week, as an incentive for the two neighboring countries to agree on a new deal.

Mexican Economy Minister Ildefonso Guajardo, who represented his government at the talks, tweeted that including Mexico and Canada in the import tax regime was not the way to a “new NAFTA.”

México shouldn’t be included in steel & aluminum tariffs. It’s the wrong way to incentivize the creation of a new & modern #NAFTA

“We should be excluded because the most integrated steel industry in the world is the North American steel industry,” Guajardo told reporters later.

Trump, however, believes that tariffs should only be lifted once a “new and fair NAFTA” agreement is signed. In a series of tweets, Trump also accused Mexico and Canada of harming the US agricultural industry and also accused Mexico of not doing enough to stop narcotrafficking.

We have large trade deficits with Mexico and Canada. NAFTA, which is under renegotiation right now, has been a bad deal for U.S.A. Massive relocation of companies & jobs. Tariffs on Steel and Aluminum will only come off if new & fair NAFTA agreement is signed. Also, Canada must..

…treat our farmers much better. Highly restrictive. Mexico must do much more on stopping drugs from pouring into the U.S. They have not done what needs to be done. Millions of people addicted and dying.

To protect our Country we must protect American Steel! #AMERICA FIRST

Dealing with drug trafficking is a shared responsibility between Mexico and the U.S. This accepted principle guides our cooperation with U.S. agencies. Only working together and addressing supply and demand we can stop the ilegal flow of drugs, cash and weapons going both ways.

The US President also faced opposition from the Republican party in Congress over the tariffs. “We are extremely worried about the consequences of a trade war and are urging the White House to not advance with this plan,” AshLee Strong, a spokeswoman for House Majority Leader Paul Ryan (R-Wisconsin). Senator Jeff Flake (R-Arizona) also warned against a “trade war.”

Free trade is not a zero-sum game. Mexico and Canada have benefitted handsomely from NAFTA – and so have we. Trade wars are not won, only lost.https://t.co/cGmHvzYVT6

Canada and Mexico are the second and third greatest US trading partners, each accounting for more than $500 billion in trade per year, almost rivaling China and the 28 European Union member states combined. NAFTA, signed by former President Bill Clinton in 1994, has been criticized as a disastrous deal for US manufacturing jobs by the same labor unions that backed his election campaign as well as his wife, Hillary’s.