US forces will remain in Syria so long as any Iranian-related forces operate there, the Trump administration has declared. Syria invited Iran to help fight jihadist rebels and ISIS, while denouncing the US presence as illegal.

“We’re not going to leave as long as Iranian troops are outside Iranian borders, and that includes Iranian proxies and militias,” national security adviser John Bolton told reporters at the UN General Assembly session in New York on Monday.

He also blamed Iran for “attacks in Syria and Lebanon” and said it was “really the party responsible for the shooting down of the Russian plane” last week.

Syrian air defenses shot down the Russian Il-20 scout during an Israeli airstrike on Latakia province, while trying to target Israeli F-16 jets, according to Russian military. Moscow blamed Israel for the incident, and said it would sell S-300 air defense missile systems to its allies in Damascus. 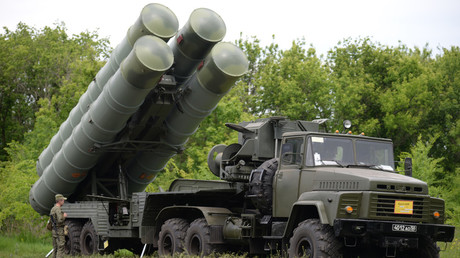 “We think introducing the S-300s to the Syrian government would be a significant escalation by the Russians,” Bolton said on Monday, “and something that we hope, if these press reports are accurate, they would reconsider.”

In a telephone conversation with Israeli PM Benjamin Netanyahu on Monday, Russian President Vladimir Putin said the decision to upgrade the Syrian air defenses was made primarily to “prevent any potential threat to the lives of Russian servicemen, who are on a mission to fight international terrorism.”

Russia has previously held off on selling the missile system to Syria due to the objections from the US and Israel, and tolerated scores of Israeli airstrikes against the Syrian government. Israel has sought to justify the strikes by citing the presence of Iranian-backed Hezbollah militia inside Syria.

Along with a Russian expeditionary force and Iranian advisers, Hezbollah has been an important ally of Damascus in the conflict against both Islamic State (IS, formerly ISIS/ISIL) militants and various jihadist “rebels” such as the Al-Qaeda affiliate Hayat Tahrir al-Sham, also known as the Al-Nusra Front.

“We are in Syria right now to defeat ISIS and destroy the geographic caliphate and make sure it doesn’t come back the moment we turn our backs,” Defense Secretary James Mattis told reporters at the Pentagon on Monday, adding that the US will not expose Syrians it freed from IS to a “brittle military pullout.”

Mattis also said he and Bolton were on the “same sheet of music” when it came to Syria, and had talked about it twice already on Monday.

US special forces have been in Syria since approximately 2014, working with Kurdish-led militias to fight IS in the country’s northeast. They are working to set up alternate government structures in territories reclaimed from IS, and have have targeted Syrian forces on multiple occasions. Damascus condemns their presence as illegal occupation, and has vowed to remove them by force if necessary.

Bolton’s statement moves the goalposts previously established by his boss. President Donald Trump has repeatedly stated that US troops are in Syria to eradicate IS, and would leave after that mission is complete.

While Trump has publicly advocated for less US military involvement around the world, his foreign policy team – from Bolton to Secretary of State Mike Pompeo and envoy to the UN Nikki Haley – has embraced the continuity of US foreign policy, demanding “regime change” in Damascus as well as Tehran.