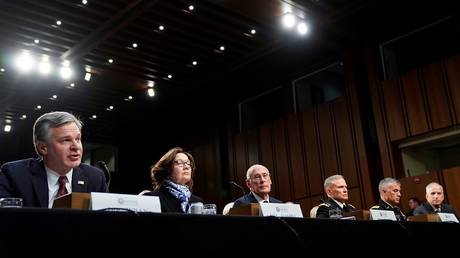 US intelligence chief Dan Coats painted a dire picture of a danger-filled world to the Senate, contradicting the Trump administration’s optimism on North Korea and pessimism on Iran while beating the drum of Russiagate.

Testifying before the Senate Intelligence Committee on Tuesday, Director of National Intelligence (DNI) Coats argued that China and Russia are united in opposition to “perceived US unilateralism and interventionism and Western promotion of democratic values and human rights,” while a number of US allies “are seeking greater independence.”

The DNI’s prepared remarks ran counter to many Trump administration talking points, in particular on the issues of North Korea and Iran – while mirroring the obsession of some Republicans with China and most Democrats with Russia.

✅ Russia will interfere in 2020 election

✅ China is a cyber espionage threat

✅ Climate change is a major threat

✅ ISIS has not been defeated

North Korea is “unlikely” to surrender its nuclear weapons, while Iran is not “currently undertaking the key nuclear weapons-development activity” several Trump administration officials have accused it of, Coats said.

Ahead of a planned summit with North Korean leader Kim Jong-un next month, President Donald Trump has been keen to tout Kim’s vague promises of denuclearization as progress towards peace on the Korean peninsula.

“Kim Jong Un says North Korea will not make or test nuclear weapons, or give them to others – & he is ready to meet President Trump anytime.” PBS News Hour. I also look forward to meeting with Chairman Kim who realizes so well that North Korea possesses great economic potential!

Coats told a different story on Tuesday. “We continue to assess that North Korea is unlikely to give up all of its nuclear weapons and production capabilities, even as it seeks to negotiate partial denuclearization steps to obtain key US and international concessions,” his prepared remarks argued.

Though the Trump administration has been beating the drums of war with Iran ever since exiting the JCPOA nuclear deal last May, Coats and the spy chiefs told the senators that Tehran has remained party to the deal, and has not reactivated its nuclear program.

“We do not believe Iran is currently undertaking the key activities we judge necessary to produce a nuclear device,” Coats said in his prepared remarks. Nuclear research conducted by Iran since last year, Coats continued, has been done within the limits of the JCPOA.

The DNI did express concern at Iran’s traditional military capability, as well as its ongoing ballistic missile program and ambitions in Syria, but that didn’t quite rise to the level of Trump’s rhetoric at the UN last September, when he accused Tehran of sowing “chaos, death, and destruction” across the Middle East..

Russia and other foreign actors will try new techniques to interfere in the 2020 elections, building off the tactics they used in the 2016 and 2018 campaigns, America’s top intelligence official warned Tuesday.https://t.co/xEElVsrODM

Russia and China featured prominently in the DNI’s report, particularly with regard to cybercrime. China “presents a persistent cyber espionage threat and a growing attack threat to our core military and critical infrastructure systems,” Coats argued, adding that China has the potential to use private tech companies to carry out espionage against the US and allies.

Coats’ fear is shared by the Pentagon – which banned Huawei and ZTE phones from US military bases last year – and by other intelligence chiefs, who accused the firms of spying on behalf of the Chinese government.  Huawei has also been barred from participating in the US rollout of 5G networks, while Trump is reportedly considered barring US firms from using Huawei and ZTE equipment.


Russia, on the other hand, is accused of “aggravating social and racial tensions” online, in line with similar accusations that have been leveled at Moscow since the 2016 election.

Though no doubt pleasing to the ears of Senator Mark Warner (D-Virginia), the committee’s ranking member and a major driver of the ‘Russiagate’ narrative, Coats’s testimony offered no actual evidence for Russian interference in the 2016 election.

Just last month, the DNI sent a report to the White House admitting that, while Russia conducted “messaging campaigns” on social media during the 2018 midterms, the intelligence community “does not have intelligence that indicates any compromise of our nation’s election infrastructure that would have prevented voting, changed vote counts, or disrupted the ability to tally votes.”

In the end, however, the spies painted the exact same picture of the world they paint every year: one in which US hegemony is beset with threats from every direction, and therefore requires lavish spending of taxpayer funds and unlimited spying powers.