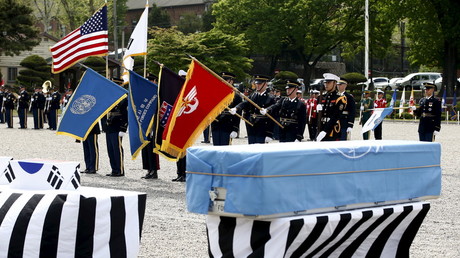 The US military has sent 100 wooden caskets to the border of North Korea in preparation for the repatriation of the remains of US soldiers killed in the Korean War.

More than 36,000 US troops died in the 1950-1953 war. Around 7,800 US military personnel still remain unaccounted for, according to the Defense POW/MIA Accounting Agency.

The consignment of “100 wooden temporary transit cases” was confirmed by US Forces Korea, who said that the coffins, built in Seoul, had been transferred to the Joint Security Area (JSA) on Saturday so the remains can be moved in “a dignified manner” when the time comes.

Today UNC moved 100 wooden Temporary Transit Cases, built in Seoul, to the JSA. We are preparing to receive and transport remains in a dignified manner when we get the call to do so.

“We are also moving United Nations Command (UNC) flags to the JSA and also trestles on which the boxes can stand as we prep them ready to move them to Osan,” a US Forces Korea (USFK) official said.

The Joint Security Area in the truce village of Panmunjom is the only site where both North and South Korean forces come face-to-face. It is not yet known when exactly the repatriation will occur but officials expect it to happen soon.

READ MORE: Trump praises Kim Jong-un’s leadership, wants Americans to stand to attention for him too

US Forces Korea spokesman, Col. Chad Carroll, however, denied a report from South Korean news agency Yonhap that US military vehicles carrying more than 200 caskets were planning to cross into North Korea Saturday.

He dismissed it as “completely false” and said plans were “still preliminary.”

Carroll also said 158 metal transfer cases were being sent to a US air base near Seoul and would be used to bring the remains home.

North Korean leader Kim Jong-un reached an agreement with US President Donald Trump to return the remains during their June 12 summit in Singapore. The repatriations will mark the first to the US in over a decade.