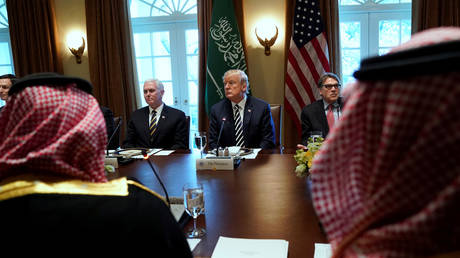 The US lawmakers have demanded answers from the Energy Secretary Rick Perry who allowed a number of US firms to share sensitive nuclear energy information with Saudi Arabia, under the public radar.

Secretary Perry had issued seven so-called ‘Part 810 authorizations’ to US companies, allowing them to export “unclassified civil nuclear technology” to Saudi Arabia. The details of the deals, however, have not been made public out of fear that they might reveal “proprietary business information.”

While the Department of Energy stressed that “no enrichment or reprocessing technology” was shared with the Gulf kingdom, members of the Senate Foreign Relations Committee have written a letter to Perry, giving him until April 10 to provide them with details of the authorizations, Reuters and The Washington Post have learned.

Also on rt.com
Trump accused of seeking to sell US nuclear ‘secrets’ to Saudis… so why is this Russia’s fault?


In their letter, Senators Bob Menendez (D-NJ) and Marco Rubio (R-Fla) reminded Perry that the US does not have the so-called 123 agreement with Riyadh which would allow the Nuclear Regulatory Commission to license the export of nuclear material, equipment and components. Such an agreement can only be approved with the blessing of Congress, following a thorough review process by the Departments of Defense, of Commerce and by the Nuclear Regulatory Commission.

“We are particularly concerned about this mechanism being used right now with Saudi Arabia,” the Senators wrote, according to the WP, stressing that they fear Riyadh could use the American nuclear know-how to acquire nuclear weapons.


Earlier reports indicated that President Donald Trump’s adviser and son-in-law Jared Kushner had engaged in secret dealings for the transfer of nuclear technology to build dozens of power plants in the Saudi desert. Amid the negotiations, it was reported that Riyadh refused to agree to restrictions on enriching uranium and processing plutonium, which would allow the Kingdom to eventually produce nuclear weapons.

“Many in Congress, therefore, worry that Saudi Arabia’s interest in someday producing its own stocks of nuclear fuel – despite the fact the Kingdom could purchase fuel on the international market more cheaply – could lead to it to divert fuel to a covert nuclear weapons program,” they wrote.

We… believe the United States should not be providing nuclear technology or information to them at this time.

Considering that the US Congress is in the process of reevaluating the US-Saudi relationship, following recent “deeply troubling actions and statements” by the kingdom, the lawmakers advised Perry to stop any information-sharing with the Saudis.