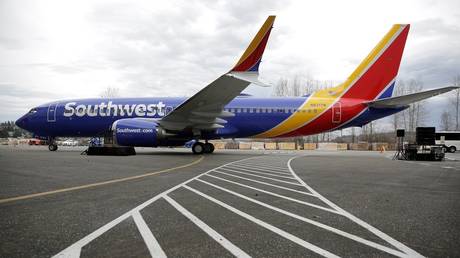 Senators from both parties have called for grounding the Boeing 737 Max 8 airliner, following the fatal crash in Ethiopia that killed 157. Even President Donald Trump is having doubts, though Boeing is insisting the plane is fine.

Senator Ted Cruz (R-Texas) is the most recent voice calling for the grounding of the 737 Max, saying it would be “prudent” to do so “until the FAA confirms the safety of these aircraft & their passengers.”

As chairman of the @SenateCommerce‘s Subcommittee on Aviation and Space, I intend to hold a hearing to investigate these crashes, determine their contributing factors, and ensure that the United States aviation industry remains the safest in the world.

Cruz is the head of the Senate Commerce Subcommittee on Aviation and Space, and has called for a hearing on the cause of the 737 disasters. In addition to the Ethiopian Airlines tragedy, the same type of airliner – operated by Indonesia’s Lion Air – crashed in October last year killing 189 passengers.

The Federal Aviation Administration declined to order the grounding of the 737 Max 8. There are currently 74 jets of that model registered to fly in the US, according to FAA records.

If we identify an issue that affects safety, the FAA will take immediate and appropriate action.

Boeing referred to that FAA statement to argue that it had “full confidence in the safety of the MAX” and that “based on the information currently available, we do not have any basis to issue new guidance to operators.”

Also on rt.com
Boeing disaster: Countries that did & DID NOT ground 737 MAX 8 amid probe; BILLIONS at stake


The possibility a mechanical flaw in the 737 Max 8 might be responsible for the crashes, however, has united Republican and Democrat lawmakers normally at odds over just about everything. Senators Elizabeth Warren (D-Massachusetts), Richard Blumenthal (D-Connecticut), Dianne Feinstein (D-California) and Mitt Romney (R-Utah) have all called for grounding the jet immediately, out of abundance of caution.

“The world has now witnessed the second tragic crash of one of these planes in less than six months,” said Warren. “While we do not know the causes of these crashes, serious questions have been raised about whether these planes were pressed into service without additional pilot training in order to save money.”

Out of an abundance of caution for the flying public, the @FAANews should ground the 737 MAX 8 until we investigate the causes of recent crashes and ensure the plane’s airworthiness.

The FAA & the airline industry must act quickly & decisively to protect American travelers, pilots, & flight attendants. All Boeing 737 Max 8s should be grounded until American travels can be assured that these planes are safe. https://t.co/6yRQFasFHR

Even President Donald Trump has chimed in, tweeting on Tuesday that airplanes are “becoming far too complex to fly” and demanding too much of pilots.

I see it all the time in many products. Always seeking to go one unnecessary step further, when often old and simpler is far better.

On Tuesday morning, Trump received a phone call from Boeing’s chief executive, Dennis Muilenburg, who reportedly asked him not to ground the fleet.

UPDATE: A @Boeing official said that during the call with TRUMP this morning, the @BoeingCEO “reiterated our position that the Max is a safe aircraft.”

The controversial airliner remains in service in the US, Canada, the United Arab Emirates, Iceland, and Brazil, but has been ordered to be grounded by Australia, China and the EU. Airlines in Russia, Argentina, Singapore, Morocco, Indonesia and South Africa, among others, have also grounded their 737 Max 8s.