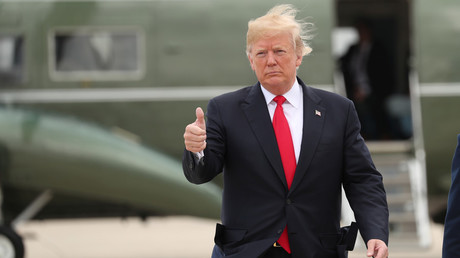 With the abrupt cancellation of a much-vaunted summit between President Donald Trump and North Korean leader Kim Jong-un, peace on the Korean peninsula has been postponed. So too has Trump’s shot a Nobel Peace Prize, it seems.

The suggestion that Donald Trump could win a Nobel Peace Prize was a laughable one last year, as he taunted Kim with nuclear threats and schoolyard insults, calling him “little rocket man” and “short and fat.”

The threats soon melted, though, and preparations for a meeting between the two leaders began this March. So historic was the detente that former US President Jimmy Carter declared just this week that if the summit were successful, Trump should be considered for the Nobel Prize.

All that changed on Thursday, however, as Trump cancelled the June 12 summit, blaming it on “tremendous anger and open hostility,” from the Kim regime.

Trump’s letter to Kim mostly lamented the missed opportunity for peace, but it also contained one barely-veiled threat: “You talk about your nuclear capabilities, but ours are so massive and powerful that I pray to God they will never have to be used.”

To some, the fact that Trump is now surely ruled out of contention for the Nobel came as a relief:

To others, like Rep. Gerry Connolly (D-Virginia), it was just another excuse to ridicule the president:

N Korea summit cancelled. I guess that Nobel Peace Prize will have to wait. Covfefe!

“I think it’s a good thing for Kim Jong Un,” House Minority Leader Nancy Pelosi (D-California) said in her weekly press conference. “He got global recognition and regard. When he got this letter from the president saying ‘OK, never mind’…he must be having a giggle fit right there in North Korea.”

Pelosi’s fellow Democrats all expressed their dismay at the cancellation and their disapproval at Trump’s handling of the whole situation.

The cancellation by @POTUS of the North Korea Summit with Kim Jong Un has just increased the chances of war. The timing is particularly odd given that North Korea allegedly just destroyed parts of a nuclear test site as a show of good faith.

You can’t begin a negotiation with NK by advocating for the worst conclusion for its leader & expect that negotiation to succeed. President Trump did little to disavow this declaration from his advisors & has approached this summit from the outset with naivete and inconsistency.

This is a setback. This is an error. This is what happens when amateurs are combined with warmongers. This is NOT secretly smart and clever, and any pundit or politician who even flirts with that idea is deeply, deeply unserious.

To some Republicans, however, pulling out was the right thing to do in the face of Kim’s recent wavering commitment and tough-guy posturing.

“Kim Jong Un is a murderous despot and habitual liar,” said Nebraska Republican Senator Ben Sasse. “The President made the right call to cancel this summit. If North Korea wants diplomacy, it should know that half-measures and spin about its nuclear program won’t cut it.”

Kim Jong Un is a murderous despot and habitual liar. The President made the right call to cancel this summit. If North Korea wants diplomacy, it should know that half-measures and spin about its nuclear program won’t cut it.

Kim Jun Un, in the words of a wise man “Congratulations, you just played yourself”. Withdrawing from talks with #NKorea is 100% the right decision. #KJU doesn’t want a deal. He has deliberately sabotaged the talks over the last two weeks & was setting us up to take the blame.

In his letter to Kim, Trump left the door open to potential talks in the future, asking Kim to “call me or write,” if he changes his mind. For now, though, peace is off the table.