A Georgetown University professor, suspended from Twitter over calls to murder ‘entitled white men’ for supporting Judge Brett Kavanaugh and to ‘castrate their corpses,’ is being sent to travel internationally for research.

Dr. Carol Christine Fair made headlines this week when she tweeted that “entitled white men justifying a serial rapist’s arrogated entitlement” deserve “miserable deaths” and that, as a bonus, their corpses should be castrated and fed to pigs.

Twitter suspended her account over that post on Tuesday, temporarily, as it turns out, because Fair was back on the social network within a day. Meanwhile, Georgetown’s School of Foreign Service, where she teaches, has decided to “punish” her by sending her on a trip abroad. 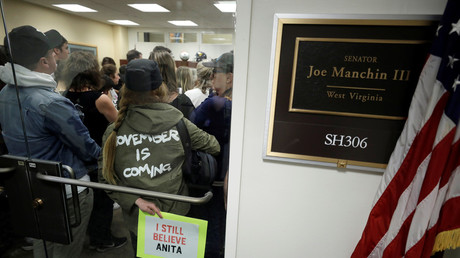 “We can and do strongly condemn the use of violent imagery, profanity, and insensitive labeling of individuals based on gender, ethnicity or political affiliation in any form of discourse,” SFS dean Joel Hellman said on Friday.

“To prevent further disruption to her students and out of an abundance of caution for the security of our community, we have mutually agreed for Professor Fair to go on research leave, effective immediately,” Hellman wrote in a statement, explaining that she will “accelerate previously scheduled international research travel.”

Fair, who describes herself on Twitter as an “inter-sectional feminist, pitbull apostle, scotch devotee, nontheist, resister,” was unrepentant. Taking a page from New York Times’ editor Sarah Jeong’s playbook, she argued that the tweet was “using the language of the abuse I receive by the hundreds.”

On Thursday, the National Coalition for Men (NCFM) filed a Title IX complaint against Fair with the Department of Education, arguing she is “an active and ongoing security threat to her male students, she cannot be expected to teach her male students in a fair manner, and her presence creates a hostile environment against young male students on campus.”

“She is an ongoing security threat to her male students, and she cannot be expected to teach men students in a fair manner” https://t.co/PeM8h05Hsw

NCFM lawyer Marc Angelucci expressed surprise that Fair was not fired by Georgetown, saying that “if a male professor said those horrific things about female senators, he’d be fired immediately, not to mention mobbed and vilified in the media.”

“Anyone who confuses a critique of male privilege with animus towards men is being daft or willfully mendacious,” the professor told PJ Media.