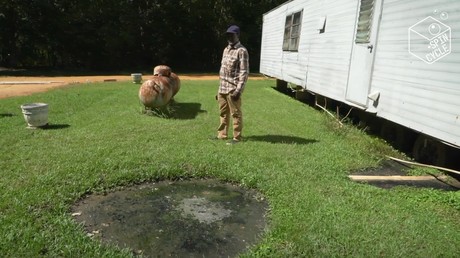 Hookworm, a blood-sucking parasite thought eradicated in the US in the last century, is now seeing a resurgence in Alabama. In the Now explains how wealth inequality and racism put the state on par with countries like Honduras.

Lowndes County is part of Alabama’s so-called Black Belt, a name reflecting its majority population and dark soil. The soil has clay-like properties and cannot absorb water very well. It means special septic systems need to be installed there to treat sewage. Spending some $10,000 on such a system in a country where a third of people live in poverty is not an option for many households, so they often get a regular system that is twice cheaper. Unfortunately, such septics clog and overflow in rain, resulting in literal cesspools forming in people’s backyards.

Hookworm, a parasite that can cause anemia and hamper development in children, spreads through raw sewage. The worm lives in the guts and their eggs are spread through the host’s feces. The larvae live in the ground and get inside a host who happens to walk nearby. So if the sewage is treated properly, the parasite’s life cycle is broken. The poor residents of places like Lowndes County don’t have this sanitation luxury.

Few locals suffering from this problem, however, are willing to speak on camera, fearing fines from health officials. Walter McMeans is one of those. He agreed to explain his situation to In the Now journalist Rania Khalek, and to the crew of Vice News, when they came to report on the hookworm threat.

The irony of the fact that poorest communities in the US suffer from a treatable infection that is commonly associated with the world’s poorest countries was not missed by the UN’s Special Rapporteur on poverty, Philip Alston. His report came just as Washington was withdrawing from the UN Human Rights Council, with Nikki Haley, the American envoy to the UN, denouncing the body as a “cesspool of political bias.”


“I note with regret that United States Ambassador Nikki Haley has characterized this Council as a cesspool and has chosen to withdraw from it just days before my presentation. Speaking of cesspools, my report draws attention to those I witnessed in Alabama,” he noted at the time.

There is certainly a race dimension to the problems that residents of Lowndes County face, but it mostly is about wealth inequality and poor people not getting the support they need, said local activist Catherine Flowers.

“I’ve seen places in West Virginia and Tennessee, and Kentucky, where poor white people are treated the same way,” she said. “Of course people of color are going to be marginalized simply based on that fact alone. But also people that don’t have the means. They are not making it available to poor people, period.”