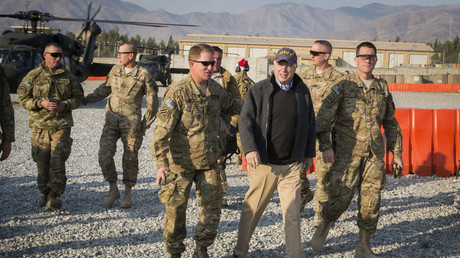 Despite being pre-emptively ‘disinvited’ by McCain from his funeral, Donald Trump has expressed his condolences, joining a long list of US politicians praising the late John McCain’s patriotism, heroism and high morals.

“Our hearts and prayers are with you!” Trump tweeted after McCain’s family announced the senator’s death. Recalling John McCain’s six-decade service to the nation, many US politicians called the Republican a true “patriot” and a “war hero.” Others noted the 81-year-olds “dignity” and “values” that were cherished by all Americans.

My deepest sympathies and respect go out to the family of Senator John McCain. Our hearts and prayers are with you!

“We have lost a man who steadfastly represented the best ideals of our country,” Defense Secretary James Mattis said in a statement.

Tonight is a sad night for all Americans. John McCain was a patriot and a war hero. He fought for our Nation, on the battlefield and in Congress, and America will forever be grateful for his courage and sacrifice. My prayers are with the McCain family this evening.

Throughout his entire life, John McCain exemplified the honor, dignity, and values we cherish as Americans. A hero of the Vietnam War and a dedicated public servant in the Senate, he is a patriot of the highest order. May he rest in peace and may God bless his family.

Sen. Bernie Sanders also called McCain his “friend” and an “American” hero”, noting the politician’s “decency and honor.” “He will be missed not just in the U.S. Senate but by all Americans who respect integrity and independence,” the Vermont senator said.

John McCain was an American hero, a man of decency and honor and a friend of mine. He will be missed not just in the U.S. Senate but by all Americans who respect integrity and independence. Jane and I send our deepest condolences to his family.

Republican Party chair Ronna McDaniel noted that McCain was a strong supporter of American leadership in the world, as well as a “tireless champion of our nation’s troops and veterans.”

John McCain was a true patriot who dedicated his life to serving his country. He was an advocate for American leadership in the world and a tireless champion of our nation’s troops and veterans. Our prayers are with the entire McCain family.

The US lost “one its most distinguished men of gallantry,” former National Security Advisor Colin Powell noted. The retired four-star general and a long time friend of the Senator highlighted McCain’s toughness, demonstrated when he was a prisoner of war in Vietnam.

While the political community paid its respect to the 36-year veteran of Capitol Hill, those closest to Sen. McCain shared their personal sadness.

“My heart is broken,” his wife Cindy said. “I am so lucky to have lived the adventure of loving this incredible man for 38 years. He passed the way he lived, on his own terms, surrounded by the people he loved, in the place he loved best.”

“My father is gone, and I miss him as only an adoring daughter can,” his daughter Meghan said, in a long, heartfelt statement. “I was with my father at his end, as he was with me at my beginning…he showed me what it is to be a man.”