Announcing the start of military operations against the remaining strongholds of Islamic State, the US State Department included some pointed language, hinting at de facto partition of Syria, analysts tell RT.

“The days of ISIS controlling territory and terrorizing the people of Syria are coming to an end,” State Department spokeswoman Heather Nauert said on Tuesday.The operations will be conducted by the US-led coalition and local partners, including the Kurdish-majority Syrian Democratic Forces.

The US will also work with Turkey, Israel, Jordan, Iraq and Lebanon to “secure their borders” from Islamic State (IS, formerly ISIS/ISIL), Nauert said. This is intriguing, because the only remaining IS presence is near the Iraqi border, with a pocket south of Damascus currently being cleared out by Syrian government forces.

Nauert also said the US will ensure there is a “strong and lasting footprint” in Syria so that IS cannot return and the liberated populations “are not exploited by the Assad regime or its Iranian supporters.”

Last week, the US House of Representatives passed the “No Assistance for Assad Act,” or HR 4681. If approved by the Senate, it would mandate that any US funds for recovery, reconstruction or stabilization in Syria “should be used only in a democratic Syria or in areas of Syria not controlled by a government led by Bashar al-Assad or associated forces.”

Between Nauert’s statement and the House bill, a question arises on whether the US intends to allow the reintegration into the Syrian state of any areas liberated from IS.

US statements supporting the territorial integrity of Syria “are only words” that serve as cover for “plans to partition Syria,” Russian Foreign Minister Sergey Lavrov said on Saturday, after a meeting with Turkish and Iranian officials in Moscow. Lavrov had also warned earlier this year about Western plans to partition Syria. 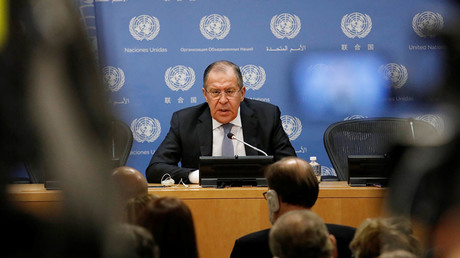 The State Department’s language is “subterfuge,” former Pentagon official Michael Maloof told RT. The US and its allies intend to occupy the eastern part of Syria and partition the country, in order to “use the Sunnis in East Syria and West Iraq to form a barricade to stop any Iranian influence and cut off supplies to Hezbollah.”

Washington’s objectives are aligned with the axis between Israel and Saudi Arabia, Maloof added, with Israeli PM Benjamin Netanyahu hoping the US will fight Iran for Israel.

“They will go alone if they have to and drag the US into it,” Maloof told RT. “We’re getting sucked into another war.”

Nauert’s reference to a “future political settlement that honors the will of all Syrians, including Sunni Arabs, Kurds, Christians, Turkmen, and other minorities” could mean either regime change or some form of partition, former US diplomat Jim Jatras told RT. The State Department notably made no mention of Shia or Alawite Syrians.

“Even if the Syrian government headed by President Assad remains in power in the west,” Jatras said, “de facto or de jure areas will be created for Kurds and particularly Sunnis.” The reference to Turkmen could signal the possibility of permanent Turkish presence in, or even annexation of, some parts of Syria, he added.

“ISIS is a sideshow. The real US targets are the Syrian government and its Russian and Iranian backers,” Jatras said. “The stage is being set for a confrontation with Iran, in which Syria is simply one theater.”

“The reference to Christians is simply cynical. It is intended to make Americans think we give a damn about Syria’s Christians, despite seven years of arming and funding jihadists for whom Christians are prime targets for murder and enslavement,” Jatras explained.

The US has approximately 2,000 troops in Syria, who are there without legal authorization. The Russian military contingent that has aided Damascus against IS and other terrorist groups arrived in September 2015 at the government’s invitation.