Keen as ever on his idea of creating an American fighting force in space, US President Donald Trump has said it’s a necessity for Washington, because its perceived top adversaries – Russia and China – are beating it to the punch.

Trump was speaking at one of his Make America Great Again rallies, this time in Richmond, Kentucky. He was boasting about his record $700bn+ military budgets that would “fully rebuild the American military,” and decided to top it off with a promotional line for the Space Force, whose creation is already underway.

“It’s very popular,” he described the concept. “One of the biggest applause I get wherever I go is when I talk about the Space Force.”

He then proceeded to explain why it’s such a necessary thing: because those the US defense establishment calls its ‘main adversaries’ have a head start.

Setting aside the question of how Trump plans to use the best tanks and ships in the world in space – along with the rest of the American exceptionalist chant – he is not factually wrong. Just a bit off the mark, or possibly intentionally misleading the cheering crowd.

Russia does indeed have a space force – has had for years, in fact, and recently integrated it with the air force to create the Aerospace Forces. Just as the US used to have a Space Command since the 1980s, which became part of STRATCOM in 2002. 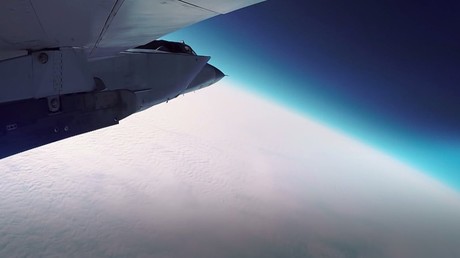 The key difference is in the mission statements. The Russian space force exists to “observe space objects, detect threats to Russia in space and from space, and counter them if necessary,” launch satellites for military and dual (military plus civilian) use, obtain satellite intelligence, as well as maintaining them in working order. In short, nothing any country with reasonable satellite-launching capability, including the US, doesn’t do already.

What Trump wants to do with his space force is to be able to “degrade, deny, disrupt, destroy, and manipulate adversary capabilities to protect US interests, assets, and way of life.” Protecting American way of life is known to be a conveniently loose definition that has taken the US into a number of wars, some of which are still ongoing on the other side of the planet from Washington.

Both China and, reportedly, Russia have tested missiles on their own satellites, in 2007 and 2015, respectively. But it would be misleading to say they are ahead of the US on that, either, considering America destroyed one of its own the same way in 2008.

What Trump may have been referring to is the recent sighting of a MiG-31 above Moscow region carrying a mysterious missile, which was immediately speculated to be a new Russian satellite-killer. But that has so far remained just that, speculations.

So as Russia consolidates its air, space and missile defense forces, the US is adding a brand new sixth branch to its already mammoth military machine. The creation of the “very popular” Space Force is going to cost the cheering US taxpayer at least $13bn over five years, a sum that is likely to be revised upwards, according to Air Force Secretary Heather Wilson.