The US Air Force is switching to less-vulnerable intelligence systems in an apparent shift towards fighting Russia and China. Astronomically-priced spy planes will be replaced by cheaper sensor networks.

Behemoth electronic warfare planes and massive spy satellites are too vulnerable to the far cheaper but state-of-the-art anti-aircraft and anti-satellite missiles being deployed by Russia and China, Air Force Secretary Heather Wilson said.

In a “China or European scenario, JSTARS would not survive,” Wilson told a Mitchell Institute for Aerospace Research event on Capitol Hill last week, referring to the $244 million surveillance plane based on the Boeing 707 airliner airframe.

The $7 billion program to replace the Northrop Grumman E-8 Joint Surveillance Target Attack Radar System, to give JSTARS its full name, was thrown into doubt by that assessment from the Air Combat Command last year. 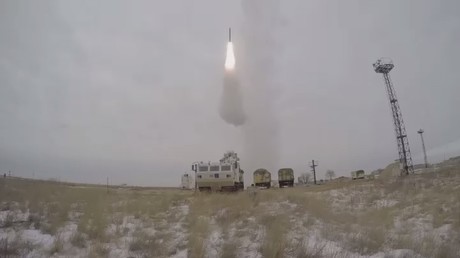 Russia has long led the way in surface-to-air-missile (SAM) development and operates the MiG-31, the fastest and heaviest interceptor fighter in service. But its new S-400 SAM, recently deployed to Syria, can hit targets 250 miles away travelling up to 14 times the speed of sound. That gives it effective anti-missile capability.

“In a contested environment, an integrated air, space, ground network is more resilient than a single point,” Wilson said, proposing an “advanced battle management system.” What that means in plain English is that the Pentagon will instead rely on a distributed network of cheap battlefield sensors to gather data on enemy movements and communications.

Air Force Chief of Staff General David Goldfein saw that kind of intelligence-gathering for himself on a visit to a military command center in the Middle East last August, Wilson said.

In a break from the normal winner-takes-all approach to tendering in the all-powerful US military-industrial complex, Wilson said, there would be no single prime contractor for the project. The problem is selling that to lawmakers.

“We have proposed it to the Congress,” said Wilson. “It’s hard to visualize. It’s a lot easier to explain one platform than to explain multiple things that would have to happen.”

Another costly contract, the Space-Based Infrared System (SBIRS) which provides early warning of nuclear-tipped ballistic missile launches, will be ended after the sixth satellite is launched. The massive satellites are too vulnerable to electronic and kinetic projectile attacks, defense officials say.

Smaller, cheaper satellites would be harder to knock out and could shift orbits to avoid being shot down, Wilson said. “We’ll keep it simple, lighter.”

Last week the UK’s China Policy Institute, based at the University of Nottingham, claimed that Beijing was “developing the means to disrupt, disable, and destroy US space-based assets.”