The US Military Academy at West Point has apologized for cadets who pulled off a daring prank on their Air Force arch-rivals by nabbing their team’s mascot falcons ahead of the annual football game, injuring a bird in the process.

The cadets’ behavior “does not reflect the army or USMA core values of dignity and respect,” the United States Military Academy at West Point said in a statement on Sunday. The USMA leadership issued an official apology to their colleagues at the Air Force Academy, whose team’s bird mascots were stolen on Friday night – right before the annual army-air force football game.

The US military schools are known for their decades-long rivalries, so the cadets often stage elaborate pranks against each other’s teams. And before the traditional football showdown at the USMA home field, the Michie Stadium at West Point, New York, cadets apparently decided to upstage the future airmen by doing just that. 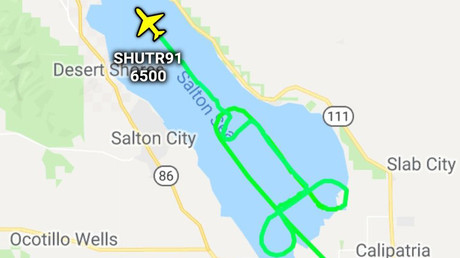 As in all sport-related trips, the birds of prey were accompanying their team, the Air Force Falcons. They were staying at the house of an army colonel, who acted as a volunteer sponsor. It was from here that the cadets stole a 22-year-old white gyrfalcon named Aurora, as well as Oblio, a peregrine falcon seven years younger.

It is unclear how many cadets participated in the operation to snatch the mascots, or how they snuck into the house. The Air Force Academy’s falconry team adviser, Sam Dollar, told the New York Times that the ‘thieves’ threw sweaters over the birds and “stuffed them into dog crates.”

The prank turned out to be a public embarrassment for West Point and sparked an uproar resulting in accusations of animal cruelty. Both birds were eventually handed over on Saturday morning, but Aurora came back with bloody abrasions on her wings. It is believed that she likely injured herself while thrashing inside the crate. Aurora’s condition immediately raised concerns, particularly due to the bird’s old age, and her injuries were initially described as “potentially life-threatening.”

We are incredibly thankful to let everyone know Aurora is in good spirits and was able to fly around her pen this morning! She will see a specialist this afternoon to determine if x-rays are necessary, but this is an extremely good sign. pic.twitter.com/BSFlYb4mCN

The falcon was quickly airlifted to Fort Carson, Colorado. After examining the bird, the veterinarians delivered a heartwarming prognosis: Despite the harrowing experience, Aurora is expected to make a “fully recovery.”