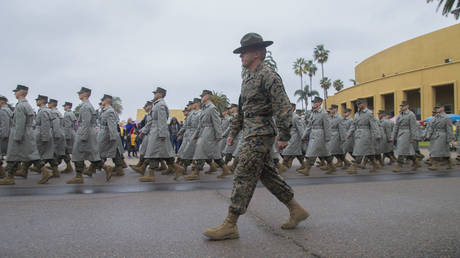 A Marine stationed in Hawaii is in hot water after an amateur investigator linked him to a series of racist and Nazi-supporting tweets, including a photo of a swastika made from TNT blocks.

Mason Edward Mead is reportedly under investigation after posts praising Nazis, photos of Hitler, and racist comments made on an account linked to his name were excavated by Marine veteran Ed Beck, who posted dozens of screenshots and claimed “many active service members, vets, and concerned civilians” had also reported the account.

Beck also dredged up an earlier account purportedly belonging to Mead, claiming the Kaneohe Bay-based Marine had “made death threats against a left-wing group and socialist leader.” Posting screenshot after screenshot, Beck said he had “hoovered up [Mead’s] social media after a tip,” but gave no hint as to its origins.

Update thanks to a tipster who kept receipts: Mead mentioned an old account that had been suspended. It’s likely this one, with which he made death threats against a left-wing group and socialist leader early last year. (They asked to be redacted. Full SS pic from separate tweet) pic.twitter.com/XFzARvwkyU

The Naval Criminal Investigative Service “is thoroughly investigating this situation and the command will address any misconduct at the appropriate judicial or administrative level,” III Marine Expeditionary Force wrote in a statement on Tuesday, though they did not confirm the identity, rank, and rate of the individual under investigation, adding “no additional details” would be released “before referral of charges.”

This recent tweet glorifying the Wehrmacht at mass before Operation Barbarossa is what brought heat on Mead this week, but it appears this isn’t the first time he’s been reported to his superiors: pic.twitter.com/WAJpb8tZIQ

Mead’s account has since been made private, but Beck’s screenshots live on. In addition to praising Nazis, the account posted derogatory comments about Asians, coinciding with the time Mead was in Japan. Other photos referenced his unit and even included parts of his name tapes on gear and utilities, according to the Marine Corps Times, which also reports that one tweeted photo shows a Marine – possibly Mead – in ersatz blackface, his face daubed with dark camo paint after a field training exercise but captioned “Hello, fellow black men.”

“We are thankful for the individuals who brought this to our attention,” the Force’s statement read. The Marines have a zero-tolerance policy regarding active participation in hate groups, though it’s unclear if Mead’s social media activities extended offline.