The US must learn from its mistakes and stop interfering in the Middle East, former US congressman Ron Paul has told RT America’s Ed Schultz. He said the US military had no more right to be in Syria than it had in Iraq.

On the 15th anniversary of the US-led invasion of Iraq, ostensibly in search of hidden chemical weapons but leading to the overthrow and hanging of president Saddam Hussein, Schultz stressed that no US officials had ever been prosecuted for manipulating intelligence reports.

“We can’t recover unless we decide to change or foreign policy,” the former Texas congressman and Institute for Peace and Prosperity chairman said. “We continue to do the same thing over and over again.”

The debacle of the 2003 war and eight-year occupation, with US troops still in the country today, was “predictable” as far back as the 1990 Persian Gulf war, the veteran politician lamented, adding: “As long as we continue to do this, we’re gonna see bad results.” 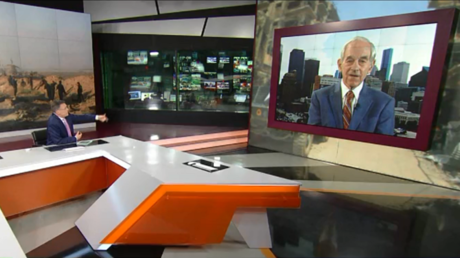 “The big issue is the foreign policy of our intervention,” Paul said, but also the way the US goes to war. “We’re giving the president authority to go to war if he wants to,” he said, on the same day the Senate voted down a bill that would have ended US support for the Saudi-led invasion of Yemen.

“That is exactly the opposite” of what the founding fathers intended. “The president was not to be a king.”

“It’s this authority that is the issue, and nobody is considering changes to this,” Paul pointed out. “And whether it’s Obama in office or the Bushes in office, it’s always the same thing.”

Paul rejected the debate on the tactics of interventionism, of “we should do such-and-such this way, and not go in here, use more air power,” insisting: “We just need to be out of there. We have no more justification for being in Iraq than we have for being in Syria right now.”

He said that while Americans were “bamboozled” into supporting the 2003 invasion by “propaganda” that “Iraq had something to with 9/11” or possessed weapons of mass destruction, they are now “waking up, because I think 60-70 percent of the American people now aren’t very trustworthy (sic) of our government.”

Asked whether the handling of intelligence had improved since what Schultz called this “horrific mistake,” Paul was scathing: “Absolutely not. It keeps getting worse. The people who are guilty get off.”