A team of US Army Green Berets have been covertly aiding Saudi Arabian forces in their fight against Yemeni Houthi rebels, according to New York Times sources.

A team of around 12 Green Berets arrived at the Saudi border with Yemen last December, despite Washington officially remaining uninvolved in the conflict. The commandos are reportedly helping Saudi forces to “locate and destroy” ballistic missiles and launch sites, which are used by the Houthis to strike targets within Saudi Arabia.

Sources also told the newspaper that the US troops are training their Saudi counterparts to secure the border with Yemen. There is no indication yet that their mission has taken them across the border and into Yemen itself.

Officially, American involvement in the conflict is limited to logistics and intelligence sharing. According to official figures, there were just over 500 US military personnel stationed in Saudi Arabia as of December last year.

The conflict between the Houthis and Saudi forces is a regional one, and the Houthis pose no direct threat to the United States and have not been classified by the American government as a terrorist organization.

Saudi Arabia has been criticized for its heavy-handedness in Yemen. Last month, an airstrike on a Yemeni wedding party killed more than 20 people and wounded dozens of others, apparently using US-made munitions. In the early stages of the conflict, one-in-three Saudi airstrikes in Yemen hit civilian targets, according to figures from the Yemen Data Project; and according to the UN, more than 10,000 civilians have died since fighting began over three years ago.

The deployment of Green Berets, the Army’s special forces, seems to mark a deepening of the already friendly military relationship between the US and the Saudis. President Donald Trump visited Riyadh last year and signed an almost $110 billion arms deal with the kingdom. This March, the State Department approved the sale of an estimated $670 million worth of anti-tank missiles to Saudi Arabia. 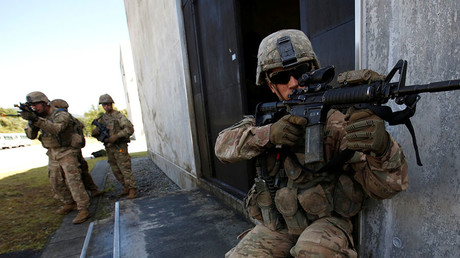 While US has not become directly involved with the Saudi campaign thus far, it has conducted attacks of its own in Yemen. Last year, the US launched over 130 airstrikes inside the Arab state, mostly targeting Al-Qaeda and Islamic State fighters.

Yemen has been consumed by civil war since 2014. In March 2015, Houthi rebels overthrew the government of President Abdu Rabbu Mansour Hadi. A Saudi-led coalition launched a campaign of airstrikes in response, aiming to restore Hadi’s rule. The Houthis have since launched missiles into Saudi Arabia, targeting the capital, Riyadh, with the latest incident in March this year.

The Houthis are allied with Iran, and allegedly use Iranian weaponry – a charge denied by Tehran. Last Sunday, US Secretary of State Mike Pompeo visited Riyadh and used this fact to hit out at Iran, again demonstrating the Trump administration’s hardline view of the country.

“Iran destabilizes this entire region,” he said. “It supports proxy militias and terrorist groups. It is an arms dealer to the Houthi rebels in Yemen.”

With the deployment of the Green Berets, the US shadow war in the region looks to be expanding. Meanwhile, the humanitarian situation in Yemen, described by the UN as the worst such crisis in the world, drags on.

More than 22 million people in Yemen are in desperate need of aid and protection. Many of the population are starving, clean drinking water is in short supply, and the country is at risk of a cholera epidemic.