People assigned to serve, need to be servants, not managers, bosses or owners, McAfee told RT. But the US government has become overbearing, corrupt and is trying to be self-perpetuating rather than serving, he added.

There’s a growing number of ways you can be followed, tracked or recognized by new technologies. For example, the Orlando Police Department plans on continuing a facial recognition program from Amazon called ‘Rekognition.’ Advocates say it’s used to find suspects and abduction victims, however the ACLU and other privacy groups say the technology “is primed for abuse in the hands of governments.”

RT: You had been for years sounding the alarm about the infrastructure and the lack of security on things like our water, electric grids. Are we in that place right now in America today, do you feel like we are protected or are we just on the verge of some sort of cyber-security attack? 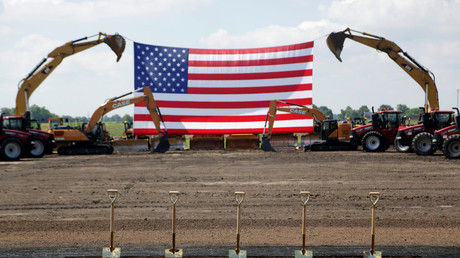 John McAfee: I’m far more concerned with the problem being with our government. Any government that is so afraid of its citizenry that it develops highly sophisticated hacking and spying tools, which the government does hack, believe it or not, and makes arrangements with companies like Google and Twitter and Facebook. And that concerns me. Because any government that is fearful of its citizenry cannot possibly represent that citizenry in the way that it’s intended. They need to be servants, not managers and bosses and owners.

RT: I hear a lot that the government is collecting data on every email, every telephone call, or every text we make. And they’re actually storing it. Is that true? Is that happening?

JM: Absolutely. And Google has admitted to cooperating with various agencies within the government to pass information about its clients. Now, maybe they’re cooperating because of a subpoena or a court order. But still it sounds an alarm to me. Can you imagine – when America was first founded – George Washington and the Senate and Congress spending time trying to spy on the American citizens? No, they were there to serve. And service by the way is… not a good job. The people who were assigned to serve, were people who did it out of a sense of duty. Now it’s done out of a sense of self-duty, of self-serving, not serving the public. I think our government has gone the way of most governments: over time governments simply become overbearing and corrupt and need to be changed. Our Declaration of Independence says that we, the citizens, have the right to change or even abolish a government which is no longer meeting its purpose. Now, if I spoke those words on a street corner, I might get arrested. That we have the right to abolish our government, of course we do. It was created by us, the citizens. And it is now spying on those various citizens that created it… The government is trying to be self-perpetuating rather than serving. This is the problem…