The United States is the 10th most dangerous country in the world for women when it comes to the risk of sexual violence, harassment and being coerced into sex, according to a new poll of global experts.

The US was the only Western country in top ten, while the other nine countries were in Africa, the Middle East and Asia, according to the Thomson Reuters Foundation poll of 548 experts in women’s issues around the world. 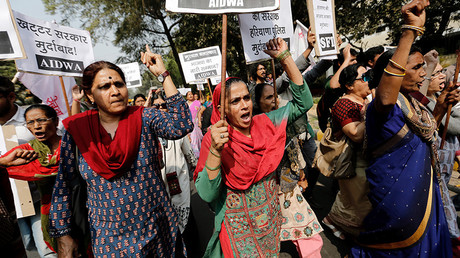 Reuters said the inclusion of the US in the top 10 was mostly due to the #MeToo movement against sexual harassment and abuse that was sparked after a series of allegations were made against Hollywood producer Harvey Weinstein and has dominated headlines for months. But not everyone was accepting of the US ranking, with CBS calling it a “dubious” list.

Topping the list was India, with what experts said was the highest risk of sexual violence and the threat of being forced into slave labour. Afghanistan and Syria were ranked second and third, with experts citing the high risk of rape and abuse for women in war-torn nations, followed by Somalia and Saudi Arabia.

Experts said that India’s position at the top of the poll reflected the fact that more than five years after the rape and murder of a female student on a bus in Delhi, not enough was being done to tackle violence against women.

Manjunath Gangadhara, an official at the Karnataka state government said that India has show “utter disregard and disrespect for women” and that rape, sexual assault, harassment and female infanticide has gone “unabated” in Indian society.

India was also ranked the most dangerous country for women when it comes to human trafficking, sex slavery, domestic servitude and for practices like forced marriage and stoning.

When it came to Saudi Arabia, experts acknowledged progress had been made in recent years but said that a huge amount still needed to be done, citing laws that require women to have a male guardian with her in public and laws which prevent women from getting a passport, travelling or sometimes not even being allowed to work.

“We need to completely obliterate this system. I think change is coming, but it takes time,” said Ahlam Akram, the founder of the British Arabs Supporting Universal Women’s Rights.

The poll was conducted online, by phone and in person and was evenly spread across experts in Europe, Africa, the Americas, South East Asia, South Asia and the Pacific. The respondents included policy-makers, non-governmental organization workers, academics, aid workers and other professionals.