The US will keep the staff numbers at its embassy at Havana at the minimum level after an emergency departure, ordered in September, expires. The step was taken after 21 staff members suffered from a so far unexplained ailment.

The State Department announced on Friday it would permanently scale back the operations of its Cuba embassy so it can perform “core diplomatic and consular functions.” The embassy would be turned into an “unaccompanied outpost,” meaning the staff’s family members will not be allowed to live at the embassy.

The measure will take effect on March 5, making a temporary departure, which was invoked back in September and left only essential diplomatic personnel in Cuba, permanent.

The “key factor” for Secretary of State Rex Tillerson to drastically shrink the size of the embassy was the risk posed to “health, safety, and well-being” of the staff in wake of what Washington believes were “health attacks” on US employees in August last year, the statement reads. The origin of the supposed attacks, six months into the investigation, is still unclear. 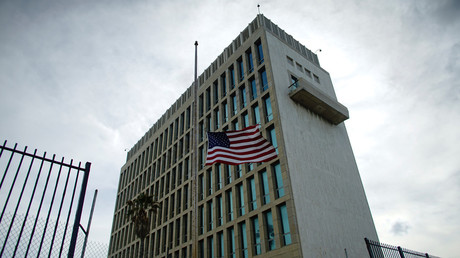 “We still do not have definitive answers on the source or cause of the attacks, and an investigation into the attacks is ongoing,” the State Department said in a statement.

At least 24 embassy staff and family members reported a set of neurological symptoms typically associated with a brain injury, including hearing and memory loss, balance issues, damage to vision and trouble sleeping. Researchers at the University of Pennsylvania who conducted the examination said that the symptoms were observed in 21 individuals.

A number of wild theories purporting to explain the symptoms have since emerged, ranging from the use of a sci-fi-like sonic weapon and poisoning,to side-effects of incessant surveillance.Some US media have, of course, pointed the finger at Russia as the possible culprit.

In its report, the University of Pennsylvania cast doubt on the version of a “sonic attack.” It stated that those who fell sick reported hearing a loud noise, but a sonic weapon would be inaudible to humans. It also added that the sounds people can actually hear are not known to cause any substantial neurological trauma.

A newly-published report by the University of Michigan disputes this conclusion, arguing that it was indeed possible for the staffers to be exposed to damaging sound. However, it offered a more down-to-earth explanation of how the implausible could have happened. The researchers believe that the audible shrill sound could have been the result of two spying devices working simultaneously. To come to this conclusion the researchers, led by associate professor Kevin Fu, first analyzed a five-second sound sample submitted by one of the victims and recently released by AP. Then, the researchers claimed to have found a combination of ultrasonic tones that created a sound which could have been heard by the staff in Cuba. “That’s 7,000 vibrations a second. It’s high-pitched, and it’s a sound that any adult or child can hear,” Fu said, as cited by The Daily Beast. 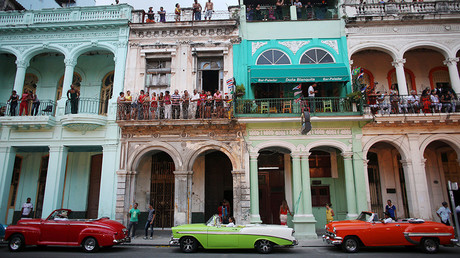 They managed to replicate the signal after placing an eavesdropping device, which would record and transmit the conversations through an ultrasonic link, and a second ultrasonic device in the same area. It was the result of a collision between the two sound waves.

While Washington still insists on using the notion of “attacks” when referring to the Cuba incidents, Havana has been denying the “sonic attack” allegations from day one.

“It’s unacceptable and immoral, from the point of view of the Cuban government, for people to be harmed by a difference between governments,” Cuba’s Foreign Minister Bruno Rodriguez said in October.

The row over the mysterious incidents has strained relations between the countries, with the US warning Americans to avoid traveling to Cuba in September amid reports it wanted Cuba to cut some 60 percent of its Washington embassy staff.

Meanwhile, a group of six Democratic lawmakers, who visited Cuba in late February, said they would ask the State Department to return the staff to the embassy, noting that nothing yet indicates that Cuba plotted to intentionally harm US officials.

“I have the impression the Cubans have offered whatever cooperation we want, in discovering what if anything happened,” Patrick Leahy, the Democratic Senator from Vermont, told AP.