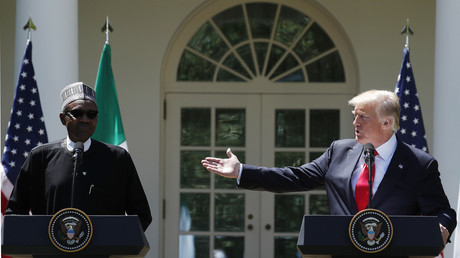 Washington is increasingly not interested in being the world policeman, US President Donald Trump has said, noting the country spent “tremendous amount of money” on policing the world.

“More and more, [we] are not wanting to be the policeman of the world,” Trump said in a joint press conference with Nigerian President Muhammadu Buhari at the White House. He was commenting on a question whether the latter managed to convince him to up the US troop presence in that country.

“We’re spending tremendous amount of money for decades on policing the world, and that shouldn’t be our priority. We want to police ourselves. We want to rebuild our country,” Trump said.

Buhari said the US has offered teams of advisers who are training the Nigerian security forces, and called it “one of the best things the US can do for us, to stabilize the country.”

Q to Nigerian president at press conf: ‘How did you convince Trump that U.S DOES want to be the policeman of the world & send troops to Nigeria?’

April 7th 2018: Trump bombs Syria because of Chemical Weapons attack on their own citizens.

Well which is it dude??

i agree… we shouldn’t police the world … what we need to do is police the police cause they are killing black people all over the country. @realDonaldTrump i love you so much 💜 #BlackLivesMatter

“We are more and more not wanting to be the policeman of the world.” Donald Trump in his usual inelegant manner abnegating America’s role in global politics.

.@realDonaldTrump: “We don’t want to be policemen of the world. We want to police ourselves.”

Puh-leez. You can’t even police your own fucking tweets, and you’ve told cops to rough-up black suspects. Nobody takes your comments seriously.

President Trump: We more and more are not wanting to be the Policeman of the world. President Buhari understands that and is doing a great job. I have great respect for the President. #PMBinDCpic.twitter.com/RxpVU442Kq