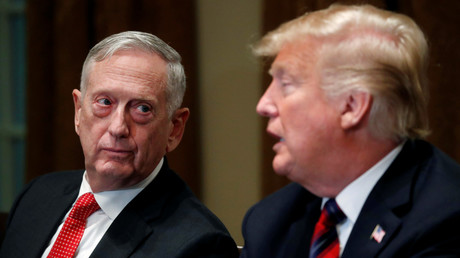 US President Donald Trump has announced Secretary of Defense Jim Mattis will retire at the end of February, confirming longstanding suspicions that the former general was on his way out of the administration.

Trump has not yet named a replacement, but says he will do so “shortly.” Mattis’ next move is not yet known. As recently as September, he dismissed talk of his departure as “rumor” and said he had no plans to retire.

A resignation letter from Mattis states he is stepping down so that Trump can hire a Defense Secretary with views more in line with the president’s own. While professing agreement with Trump’s belief that the US should not be the “policeman of the world,” Mattis stresses the importance of “providing effective leadership to our alliances” and “advanc[ing] an international order that is most conducive to our security, prosperity and values.”


The outgoing defense secretary also says Trump isn’t hard enough on Russia and China, writing that “we must be resolute and unambiguous in our approach” to them.

Trump confirmed Mattis’ exit in a tweet on Thursday, just a day after announcing he would withdraw US troops from Syria. The president has dropped hints in recent months, mentioning in October that Mattis “could be” leaving and calling him “sort of a Democrat.”

General Jim Mattis will be retiring, with distinction, at the end of February, after having served my Administration as Secretary of Defense for the past two years. During Jim’s tenure, tremendous progress has been made, especially with respect to the purchase of new fighting….

….equipment. General Mattis was a great help to me in getting allies and other countries to pay their share of military obligations. A new Secretary of Defense will be named shortly. I greatly thank Jim for his service!

In the days preceding his resignation, Mattis reportedly argued that the Washington’s “counterterrorism mission” in Syria was not complete and that to pull out now would leave the region in chaos, according to current and former US officials. His resignation seems to confirm that Trump acted against his advice on Wednesday.

Mattis joined Trump’s cabinet at the start of his presidency in January 2017 after over 40 years in the military, where he rose to direct US Central Command, overseeing the country’s entire Middle Eastern operation.