Amid new tensions between the US and Russia, Vancouver, Washington, where Valery Chkalov ended his record-breaking 1937 flight over the North Pole, has honored the Soviet pilot who became a US celebrity and built an air bridge between the two nations.

At the ceremony, the band played the Star-Spangled Banner and the Russian national anthem, while the city’s pro tem mayor spoke of the “lasting impact” the first uninterrupted flight across the North Pole has had on Vancouver. The flight was one of the most famous occasions in the life of Vancouver, a city that often has been overshadowed by its Canadian namesake further up the Pacific coast.

While a ceremony commemorating a Soviet hero in rural America may seem slightly exotic today, the sight of a plane emblazoned with the slogan “Stalin’s Route” touching down at the same Pearson Field where the ceremony was held to be greeted by General George Marshall – he of the Marshall Plan – must have seemed barely credible.

The flight came during the first heyday of aviation, when pilots were treated as intrepid adventurers – and needed to be, to set records. 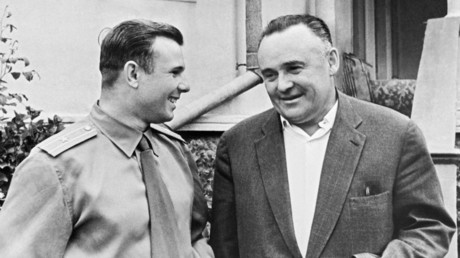 Chkalov’s personality suited his feats to a T. Born to a poor rural family in 1904, he got his chance to fly a plane at only 18, and his gifts stood out from the thousands of cadets being trained to handle the rapidly-expanding Soviet air force. His character was both courageous and rebellious – as well as pioneering several high-risk stunts, and achieving notoriety for his penchant for flying under city bridges, he was discharged and convicted for insubordination, only to be reinstated.

Boosted in equal part by a propaganda machine and his own achievements and charisma, he became as famous in the USSR as cosmonaut Yuriy Gagarin would later be, when he captained his ANT-25 on a 56-hour flight for a total of 9,374 kilometers across the Soviet Union in 1936 – an unofficial flight distance world record at the time.

But crossing the North Pole the following year would be even harder. Any flight failure – record-breaking attempts often didn’t go the distance – would mean being stranded in the Arctic Circle, an almost certain death.

Setting off from Moscow with co-pilot Georgy Baydukov and navigator Aleksandr Belyakov on June 18, 1937, the crew suffered a litany of problems, building up on each other as they flew north at a moderate cruising speed of 165 km/h.

Darkness was accompanied by fog, and along with bad visibility came the inevitable cold weather. Soon, it was -20C inside the poorly-pressurized cabin, and exhausted from a lack of sleep, Chkalov and Baydukov took two-hour turns at the helm.

Ice collected on the wings of the plane, the engine coolant froze, oil began leaking, and oxygen supplies ran low.

Worst of all, having to maneuver around storms, the pilots realized that they did not have enough fuel to reach their original destination of San Francisco, and would have to improvise a landing.

Forewarned of the ground-breaking flight, crowds began to gather at airfields all across the American Northwest. When Chkalov approached Portland’s airport, he decided that the crew and plane itself was not safe from the attentions of autograph-seekers and souvenir hunters.

So, the ANT-25 headed to nearby Pearson Field, where George Marshall, two years away from becoming the US Chief of Staff, raced the plane to make it there first, his uniform reportedly slung on top of his pyjamas.

“My father was working in Portland… He was 22 years old and was already very interested in aviation. And I think he left work in order to come over here and see this plane with his own eyes,” Barbara Fisher Smoody, one of the Washington ceremony attendees, told RT’s video agency, Ruptly.

In the event, Chkalov landed without a hitch, 63 hours 16 minutes after take-off, and an amazing 8,504 kilometers from Moscow, and with just 11 gallons of fuel left in the tank.

Despite the language barrier between the Soviet aviators and their American hosts, the meticulously planned tour was a triumph. All the front pages, a ticker tape parade in New York, and an audience with Franklin D. Roosevelt. The president spoke to the three men he genuinely admired for almost two hours, instead of the scheduled 15 minutes.

Back in Russia, Chkalov was received personally by Joseph Stalin, who already knew him well, but he never got the chance to move from cockpit to plush office. The following year, the pilot defied instructions, embarking on a test flight of a raw prototype of a Polikarpov I-180 fighter jet. The craft suffered engine failure, and hit power lines, throwing Chkalov out of the cabin and onto the ground. He died hours later, and with him came to end the I-180, and the careers of many of its constructors.

Dozens of streets in major Russian cities – and for some years even the city of Orenburg – were named after Chkalov.

But few places keep his memory as well as Pearson Field, which has become a museum and a memorial to one of the most heroic acts in civil aviation, attracting hundreds of attendees to the annual June commemoration.

“All of the people here can still see something like this as a way to come together,” said one of the attendees, Lindsey Shugart. “And that it’s not political – it’s just human connection.”