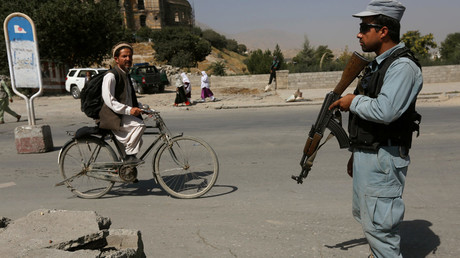 A US citizen has reportedly been kidnapped by gunmen in Kabul, according to officials cited by local Afghan media. No group has yet claimed responsibility for the man’s abduction.

A senior government official confirmed the man was taken outside his home in the Karte Char area of the city on Sunday morning local time, according to local news outlet Tolo News.

The man was reportedly advising the Ministry of Agriculture, Irrigation and Livestock on its National Horticulture Livestock Project, which aims to improve the livelihoods of rural households through stimulating agricultural production.

The project receives funding support from the Afghanistan Reconstruction Trust Fund (ARTF), which is managed by the World Bank and funded by 34 donor countries.

RT has reached out to the Ministry of Agriculture, Irrigation and Livestock, the US Bureau of Consular Affairs and the US Embassy in Kabul for more details.

The US warns there is an “ongoing risk of kidnapping [and] hostage taking” in Afghanistan.

There have been a number of recent kidnappings of foreign workers in Afghanistan. A Finnish woman working for a Swedish NGO was kidnapped in PD7, Kabul in May, and is still being held hostage.

Two professors at the American University of Afghanistan were kidnapped in Kabul last August and are also still being held captive.

The Taliban released a 13-minute video in January which appeared to show the professors pleading for their lives. The Khaama news agency reports the two are being held by the Taliban-affiliated Haqqani terrorist network, citing local officials.