The US arm of a European multinational oil and gas company has been approved to begin exploratory drilling in Alaska’s Beaufort Sea. Environmentalists argue the Trump administration doesn’t have the authority for such a move and it would endanger land and marine life.

The Bureau of Ocean Energy Management (BOEM) gave conditional approval late Wednesday to Eni US, the US subsidiary of the Italian company Eni S.p.A., to drill four exploration wells from Spy Island, an artificial island created in the Beaufort Sea in Alaska.

Drilling can only be conducted in the winter months, and is scheduled to begin in December 2017 and end in May 2019, BOEM said. The permit is for preparatory work, and does not authorize Eni to produce oil.

“Over the past 30 days BOEM has been carefully evaluating the EP (exploration plan) in accordance with federal law and regulations…[including] site-specific Environmental Assessment…[and] conclude with a Finding of No Significant Impact,” BEOM said in a statement.

The Obama administration banned oil and gas exploration in most of the US’s Arctic Ocean and Atlantic Ocean waters last year, but President Donald Trump ordered Interior Secretary Ryan Zinke in April to review the ban with the goal of opening up offshore areas for oil and gas drilling.

Eni’s lease was due to expire at the end of 2017, according to Kristen Monsell, an attorney for the Center for Biological Diversity.

The Trump administration provided the public only 21 days to review and comment on the exploration plan and only 10 days to comment on scoping for environmental assessment, according to Monsell.

“Approving this Arctic drilling plan at the 11th hour makes a dangerous project even riskier,” Monsell told the Guardian. “An oil spill here would do incredible damage, and it’d be impossible to clean up.”

The Center for Biological Diversity, Greenpeace and REDOIL, a coalition of Alaska native groups, sued the Trump administration on May 3, citing the risk of offshore oil and gas exploration development to local communities and wildlife. The lawsuit also argued that Trump’s reversal of the ban exceeded his constitutional authority and was thus unlawful.

In the lawsuit, the groups argued the Chukchi and Beaufort Seas are still undeveloped and are home to a rich array of unique wildlife species including polar bears, walruses, whales, seals, other mammals, birds and fish, some of which are classified as threatened or endangered.

“Some of these animals also support thriving indigenous Alaska Native cultural and subsistence activities,” stated the complaint. “Several Arctic mammals, including polar bears and bearded seals, have been listed under the ESA (Endangered Species Act).” 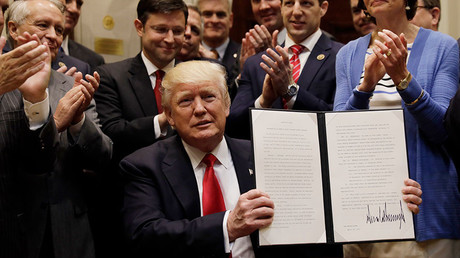 The region serves as important nurseries, feeding grounds and transit routes for marine animals. Seismic surveys and drilling activities could cause disruption and threaten wildlife directly.

The area is “remote and foreboding,” the complaint said. In winter, the seas are covered in ice and shrouded in darkness, it is prone to storms and fog, and there is little infrastructure to support industrial activity, with just small communities, and few jet runways. The region is hundreds of miles from the nearest Coast Guard station.
Mentioned in the complaint is Shell Oil’s exploratory adventures in the Beaufort and Chukchi Seas in 2012, which led to a series of problems, mistakes and violations of environmental laws.

During testing in the placid waters of Puget Sound, Shell destroyed its oil spill containment drone. On the way north, its drillship, the Noble Discoverer, dragged its anchor and nearly ran aground while moored near an Alaskan island.

Once at the drill site in the Chukchi Sea, Shell had to undertake an emergency maneuver to relocate the drillship to avoid a large ice floe. On its way back from the Beaufort Sea, it lost control of its drilling vessel, the Kulluk, which ran aground in the Gulf of Alaska in severe weather and had to be towed to Seattle, Washington and then scrapped.

The US Coast Guard cited the Noble Discoverer for numerous deficiencies after the drilling season, and the EPA determined Shell had violated the Clean Air Act during its drilling efforts and fined the company $1.1 million. Its drilling contractor pleaded guilty to eight felony offenses relating to environmental pollution and safety and agreed to pay $12.2 million in fines.