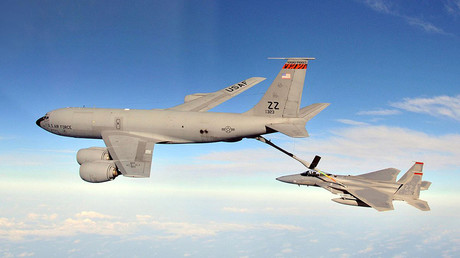 A US Air Force (USAF) jet was forced to make an emergency landing after it ran into difficulties over Scotland Wednesday morning.

The four-engine Boeing KC-135R declared an emergency at 26,202 feet (7,986 meters) near the isles of Jura and Mull, The Scotsman reports. The USAF air-to-air fuel tanker landed safely at Glasgow Prestwick Airport at 8 am local time.

“Everyone safe and well,” Ayrshire Police Chief Superintendent Paul Main tweeted. He thanked the control room staff and the Ayrshire Police for a “timely, proportionate response,” to the incident.

RT has reached out to the US Air Force for more information about the incident. According to flight tracker SR Airband & Aviation, the craft is from the 128th Air Refuelling Wing, stationed at the General Mitchell Air National Guard Base in Wisconsin.