The US Air Force is boasting of progress in upgrading and testing of its atomic arsenal, under the new aggressive posture that lowers the threshold for use of nuclear weapons and sets Washington on a collision course with Russia.

Plans to spend over $1 trillion to modernize the US “nuclear triad” – nuclear bombers and missiles launched from land-based silos and submarines – have received a boost, in the form of the new Nuclear Posture Review (NPR) and increased military budgets under the Trump administration.

Weinstein is the deputy chief of staff for strategic deterrence and nuclear integration at the USAF headquarters in Washington, DC.

The newest version of the B61, which has been in development for at least seven years, should be three times more accurate than its predecessors and have underground penetration capability. The gravity bomb’s original design dates back to 1963.

The modernized bomb is intended for arming the handful of B-2 Spirit bombers currently in service, as well as the upcoming B-21 Raider, which is still on the drawing board. The F-15 and F-16 legacy fighter jets should also be capable of carrying the upgraded bomb. 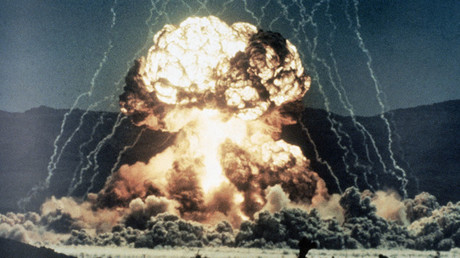 Washington’s updated nuclear posture review, unveiled in early February, envisions the possibility of atomic weapons responses to certain conventional attacks as well as the use of low-yield weapons. The B61’s yield ranges from 0.3 to 50 kilotons. The first nuclear bomb ever used, against the Japanese city of Hiroshima, had a 15-kiloton yield.

The Russia-obsessed NPR prompted Russian President Vladimir Putin to warn the US in March that “any use of nuclear weapons against Russia or its allies, be it small-scale, medium-scale or any other scale, will be treated as a nuclear attack on our country” and met with an “instant” and appropriate response.

Deploying more B61 bombs to NATO bases in Europe would also violate the nuclear non-proliferation treaty, Russia has warned.

With the B-21 still years away, the NPR has called for making the F-35 Lightning II fighter jets capable of carrying the B61. As the F-35 program is beset by a series of its own problems, this is not expected to happen until sometime in the next decade, however.

The Air Force is also hoping to extend the life of its B-52 Stratofortress bombers, first introduced in the 1950s, into the mid-21st century. To do so, however, the B-52s need new engines, and that won’t be cheap, Weinstein said.

“Am I going to sit here and say we’re not going to have a problem with the re-engining? I’m not going to say that,” the general said, according to Military.com. The Air Force is asking for $1.5 billion or so in the 2019 budget to start the effort to get new engines for the B-52 fleet. That program is expected to have a lifetime cost of up to $8 billion.