Janine Jackson interviewed Alexander Main about the Nicolás Maduro re-election for the January 11, 2019, episode of CounterSpin. This is a lightly edited transcript. 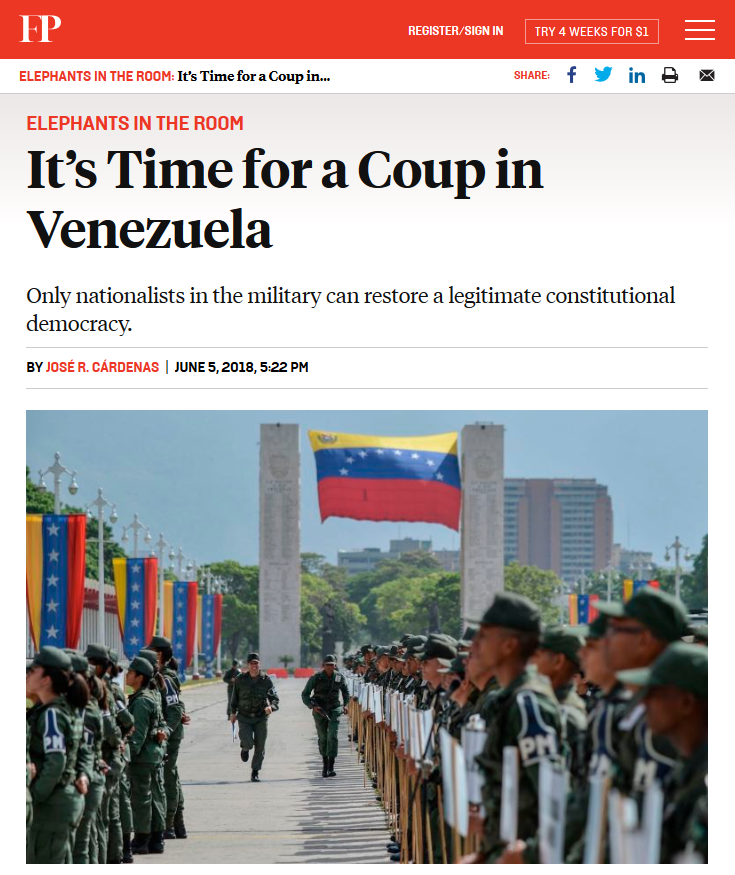 Janine Jackson: When it comes to Venezuela, elite US media don’t hide their feelings. And their feelings are all the same. Headlines on last year’s reelection of Venezuelan president Nicolás Maduro differed only in tone, including the disdainful: “As Venezuelans Go Hungry, Their Government Holds a Farcical Election,” from the Economist; the decisive:  USA Today‘s “Maduro Is Turning Venezuela Into a Dictatorship,” or Foreign Affairs’ more somber version, “Venezuela’s Suicide; Lessons From a Failed State.” There’s Forbes’ vaguely threatening “Why Nicolas Maduro of Venezuela May Wish He Lost the Presidential Election,” and Foreign Policy’s unashamed “It’s Time for a Coup in Venezuela.”

But they’re all pretty much variations on a theme that’s hard to unhear, given that media bang it out so loudly and repeatedly. Here to help us sort fact from froth is Alexander Main. He’s director of international policy at the Center for Economic and Policy Research. He joins us by phone from Washington, DC. Welcome to CounterSpin, Alex Main.

JJ: Writing for FAIR on Venezuelan elections last year, Alan MacLeod pinpointed US media’s preferred trope, which was to say that Maduro was reelected “amid”—amid outcry, amid widespread disillusionment, amid charges of irregularities, amid low turnout. The message, I think, to readers was that Maduro’s re-election was not legitimate. What should we know about last May’s elections in Venezuela?

AM: So what isn’t generally mentioned by the media is that a critical factor in the outcome of the election was the approach taken by Venezuela’s opposition. Much of the opposition, many of its parties, decided to boycott these elections, for a variety of reasons.

At any rate, the media did not examine that fact. And we’re still not seeing it very much. I think one of the few exceptions is the Washington Post, in the article that appeared today, that did mention the divisions within the opposition, and their decision not to participate that had, obviously, a huge effect on the election result.

JJ: The media coverage would give you the impression that Venezuela’s election almost happened in a vacuum, but there was in fact involvement from, for example, the Organization of American States.

AM: Well, the Organization of American States, or rather the secretary general of the organization, whose name is Luis Almagro. He represents himself. He was elected, but once secretary general, he has sort of executive power there; but he doesn’t represent the countries within the organization. He has been on a campaign against the Maduro government from very early on. It stems from their initial decision not to allow him to send electoral observers to the elections.

And this is based on a decision taken by Venezuela’s electoral authorities many years ago, when they decided that they had enough transparency, enough safety measures around the elections, that they no longer required any sort of outside tutelage.

A number of countries in Latin America have taken the same decision. It’s a decision that has to do with the respect of their sovereignty. Certainly you don’t see in the US any massive presence of international observers, even though I think a lot of people would like to see that at some point.

But anyway, this was a sovereign decision that was taken by Venezuela’s electoral authority. And following that, Almagro really went on a rampage, and has been very much involved in efforts to try to delegitimize the Maduro government and to support the very hard-line opposition.

In doing this, he went sort of out of bounds in terms of his rhetoric, even for a lot of right-wing governments in Latin America, when late last year he voiced support for a military coup, much as some US officials have done, and US members of Congress have done. And as a response, you had all of the governments of Latin America that signed on to a statement that categorically rejected the possibility of any form of military intervention, whether by coup or an outside military intervention in Venezuela.

But certainly his rhetoric, and the campaign that he has led—along with other figures, such as Sen. Marco Rubio—have certainly given the impression that there is a desire for US intervention in what’s going on in Venezuela, and that’s, I think, resulted in sort of a defensive reaction from the Venezuelan government. 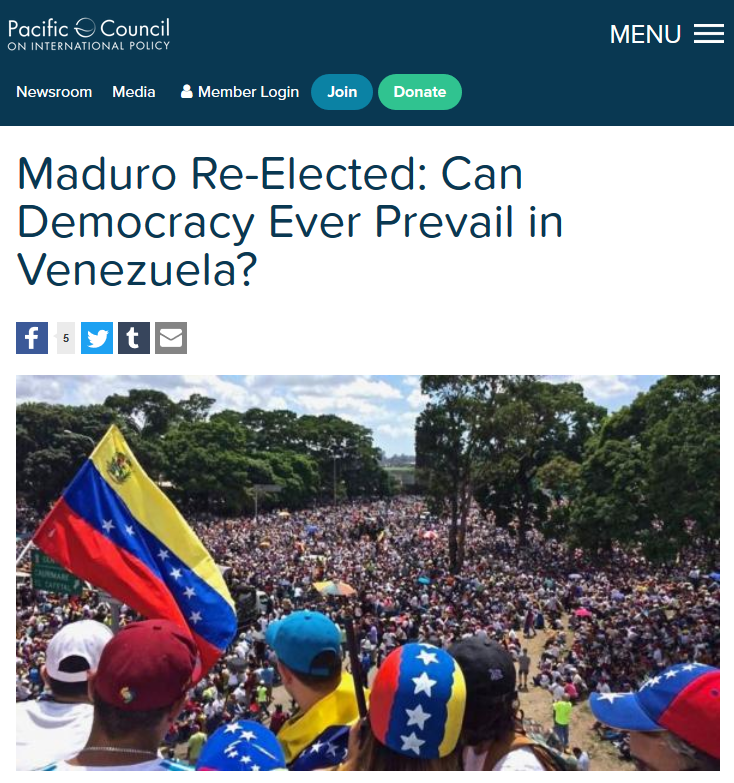 JJ: Well, it sounds very disturbing, but also confusing. You know, when I was looking through headlines, I saw one from something called the Pacific Council on International Policy that said, “Maduro Re-Elected. Can Democracy Ever Prevail in Venezuela?” I mean, just at the level of the sentence, it’s confusing. And then when you start talking about a coup to save democracy—which is the upshot of current coverage, and I guess policy—it just doesn’t even seem to make sense. The call is for the US to intervene, but the US is already intervening, isn’t it?

AM: Well, yeah, absolutely, and they’ve really been intervening in Venezuela, various US administrations, since at least the early 2000s, when we know that the US government—through institutions like the National Endowment for Democracy—has been providing funding and training to opposition groups in Venezuela, and often very hard-line groups that have taken a radical line, not recognizing the government and trying to seek its removal through extra-constitutional means, including a short-lived coup that took place in April of 2002.

The US has been very involved in trying to isolate them, Venezuela, diplomatically throughout the region, putting a lot of pressure on Latin American governments to support US measures condemning the situation in Venezuela.

More recently, the US has been applying sanctions against the government of Venezuela. And this is a very underreported thing in the US media and the international media generally.

When you see the coverage, for instance, of the Maduro inauguration, what you don’t see at all are references to the impact of the economic sanctions that have been applied. In fact, there are few media outlets at this point that even acknowledge that there are economic sanctions, even though they’ve been in place since August of 2017, when Trump announced them through an executive decree, having determined Venezuela to be an “extraordinary threat to US national security.” Those were the actual terms that were used in order to justify these sanctions.

And they’ve had a dire effect in Venezuela, which has been experiencing an economic crisis for quite a while now, since 2014 at least. And the government, of course, has failed to resolve this. It has to do with some of the government’s own economic policies. But at this point, the US also bears responsibility through these sanctions, where they have cut off Venezuela’s access to international financial markets, by which they can borrow money and purchase the necessary imports that the country needs. And we know that there aren’t enough imports of food or of medicine that are taking place at the moment.

And it’s also had a dire effect on the country’s oil production. And, of course, oil is the source of most of Venezuela’s national revenue. Along with falling oil prices, there’s been a tremendous fall in oil production in Venezuela, and it accelerated, actually, after these sanctions were put into place, because the Venezuelan government isn’t able to make the necessary investments to maintain the oil fields.

So that’s not mentioned, really, whatsoever in the major media, even though you have economists, including opposition-aligned economists from Venezuela, like Francisco Rodriguez, who have pointed out the very negative impact that these sanctions are having on the country.

JJ: Alan MacLeod also found a piece in Bloomberg that came close to acknowledging it, but in such a strange way. It was an article in which Bloomberg said that victory in the “widely derided election” gives Maduro “sole ownership of the nation’s crushing economic crisis.” And then in the very next sentence, it gloats that US and regional leaders will punish Venezuela by imposing “further isolation and sanctions on the crisis-stricken nation’s all-important oil industry.” 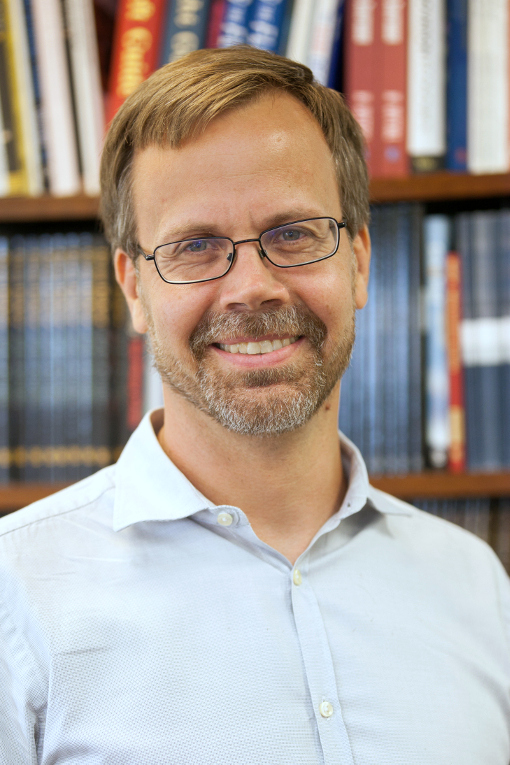 From time to time, you do see some media saying, “Oh, but the Venezuelan government says that the US sanctions are contributing to this dire economic situation.” They fail to ask any independent expert. You know, any economists that are taking a good look at what’s going on in Venezuela today will tell you, “Well, yes, these sanctions quite obviously are having a very negative impact.”

JJ: Finally, one of the things that coverage does is present the Venezuelan people as  benighted. A piece from Time from last year includes one of my favorite creations. It first of all says that the crisis, the current crisis, “can be traced to the 1998 election of Hugo Chávez to the presidency,” so Chávez is the reason that things are difficult now. But I love this presentation: “Chávez concocted a political system that used often high oil prices to essentially bribe the masses into supporting him.”

The picture of the Venezuelan people that one gets from US media coverage is really as sort of benighted, not knowing what’s good for themselves and, once again, requiring some sort of intervention to tell them how to do democracy.

AM: Yes. This is quite absurd. Really, what we’re seeing in Venezuela is, one, an extraordinarily well-organized population, and particularly in poor communities that are certainly confronting a very dramatic economic situation, but I think doing so in effective ways that make the situation somewhat sustainable for these communities. So we’re seeing a very, very high level of community organization.

I’d say the vast majority of Venezuelans at this point are probably quite disgruntled with Maduro and his government. However, the Venezuelan opposition really offers no viable alternative to the Maduro government. They have never presented any sort of coherent economic proposal, with the possible exception of the opposition candidate in last year’s election. But, of course, most of the opposition parties boycotted those elections.

And in general, I think a lot of Venezuelans, certainly those that come from lower-income communities, are well aware of the fact that the opposition is linked to the country’s traditional economic elite, and they have a terrible reputation from their involvement in governments before Chávez was in power.

Things may be bad under Maduro, but I think there’s a sense among many Venezuelans that things could actually be quite a bit worse under opposition governments, particularly if they impose the sort of neoliberal policies that hurt the poor people of Venezuela enormously during the decades prior to Hugo Chávez’s election in the late ’90s.

JJ: We’ve been speaking with Alexander Main; he’s director of international policy at the Center for Economic and Policy Research. You can find their work, including Alex’s piece, “The United States’ Hand in Undermining Democracy in Venezuela,” online at CEPR.net. Alexander Main, thank you very much for joining us today on CounterSpin.

AM: Thank you, it was a pleasure.